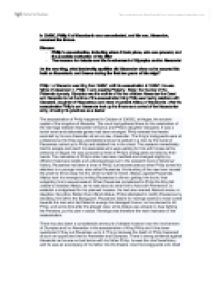 In 336BC, Philip II of Macedonia was assassinated, and his son, Alexander, assumed the throne. Discuss: - Philip's assassination, including where it took place, who was present, and the possible motivation of his killer - The reasons for debate over the involvement of Olympias and/or Alexander As the new king, what leadership qualities did Alexander show as he secured his hold on Macedonia and Greece during the first two years of his reign? Philip II of Macedon was King from 359BC until his assassination in 336BC. He was father of Alexander III, Philip III and possibly Ptolemy I Soter, the founder of the Ptolemaic dynasty. Olympias was the mother of his two children Alexander the Great and Cleopatra but at the time of the assassination King Philip was having relations with Cleopatra, daughter of Hippostratus and niece of general Attalus of Macedonia. After his assassination Philip's son Alexander took up the throne and control of the Macedonian army, showing his greatness as a leader. The assassination of Philip happened in October of 336 BC, at Aegae, the ancient capital of the kingdom of Macedon. ...read more.

Revenge was therefore the main motivator of the assassination. There has also been a considerable ammount of debate however over the involvement of Olympias and/ or Alexander in the assassination of King Philip and it has been questioned if they put Pausanias up to it. This is because the death of Philip happened at such an opportune time for Alexander and Olympias. There is strong evidence against Alexander as he was on bad terms with his father Philip, he was the chief beneficiary and he was an accompany of his father into the theatre. Also the bodyguards who killed Pausanias, including Perdiccas and Leonnutus were friends of Alexander. The question arises if they killed him because he knew too much? Alexander's position as heir to the throne was also threatened as Cleopatra might give birth to a son, (Alexander himself was only half Macedonian). There is not enough substantial proof to state an accusation but these facts do almost seem too coincedental and therefore he was suspected. ...read more.

He remembered their names and deeds, calling them by name when he would speak to them before a battle, citing their exploits. His veterans he sent home for a rest to Greece, allowing them to visit their families. He was liberal in his gifts and honours. All of these factors created an army that simply could not be stopped. Its' accomplishments so far eclipsed anything that had ever been done, Alexander and his Macedonians entered into legend. If anything was certain it was the greatness of Alexander at this time as he stepped into power after his father's assassination. Although it is seen to be standard knowledge to all interested historians that Pausanias was the killer of King Philip II there is not enough evidence that can put to rest the debate of wether there was involvement from Alexander and/or Olympias or not. It is merely left open to own interpretation of the series of events that occurred. One thing that can be drawn though that is sure is Alexander took up the position of King with great leadership skills that we still admire today and can be especially seen in the conduct of his invincible army. ...read more.