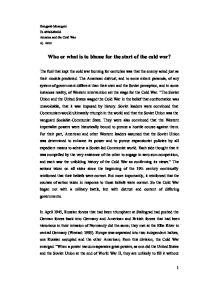 Who or what is to blame for the start of the cold war?

Kongpob Muangsiri ID.4306640428 America and the Cold War Aj. Amir Who or what is to blame for the start of the cold war? The fuel that kept the cold war burning for centuries was that the enemy acted just as their models predicted. The American distrust, and to some extent paranoia, of any system of government different than their own and the Soviet perception, and in some instances reality, of Western intervention set the stage for the Cold War. "The Soviet Union and the United States waged the Cold War in the belief that confrontation was unavoidable, that it was imposed by history. Soviet leaders were convinced that Communism would ultimately triumph in the world and that the Soviet Union was the vanguard Socialist-Communist State. They were also convinced that the Western imperialist powers were historically bound to pursue a hostile course against them. For their part, American and other Western leaders assumed that the Soviet Union was determined to enhance its power and to pursue expansionist policies by all expedient means to achieve a Soviet-led Communist world. Each side thought that it was compelled by the very existence of the other to engage in zero-sum competition, and each saw the unfolding history of the Cold War as confirming its views." The actions taken on all sides since the beginning of the 19th century continually reinforced that their beliefs were correct. But more importantly, it reinforced that the courses of action taken in response to those beliefs were correct. So the Cold War began not with a military battle, but with distrust and content of differing governments. In April 1945, Russian forces that had been triumphant at Stalingrad had pushed the German forces back into Germany and American and British forces that had been victorious in their invasion of Normandy did the same; they met at the Elbe River in central Germany (Westad: 1993). ...read more.

"National security had come to mean personal security, and Stalin saw so many threats to it that he had already resorted to murder on a mass scale in order to remove all conceivable challengers to his regime" (Maddox: 1988). Both Stalin and the Russian people felt vulnerable and especially weak on their western front from repeated surprise invasions launched against them. As a result, Stalin wanted to secure his country, to establish a 'buffer zone' against the poisonous capitalist countries to the west a crawl back into the sheltered nook that the Kremlin was. Therefore, one could deduce that Russian intensions caused the Cold War because Stalin was acting while well aware that his actions would contrast with those of America, which supports the Orthodox viewpoint. However, the United States and other western countries also had their own aims. These aims can be observed by analyzing 'The Atlantic Charter' and 'The Truman Doctrine.' Winston Churchill and Franklin Roosevelt signed 'The Atlantic Charter' on August 14,1941. While still early in the war, it was later adopted by the United Nations and remains, to this day, a cornerstone of civilization. The western powers would "seek no aggrandizement... respect the rights of all peoples to choose the form of government under which they will live...bring about the fullest collaboration between all nations...and seek the abandonment of the use of force". The Charter was basically a statement that unified the Western democracies against any right-wing fascist government. It was a precursor to Truman's policy of containment because it set democracy liberty against fascist domination and this turned out to be a central theme during the Cold War. The Cold War resulted from the western countries accepting and embracing these principles and the Soviets and eastern bloc countries not doing this. Truman's speech, called his doctrine because it outlined his plan, addressed Congress on March 12, 1947. "One way of life is based upon the will of the majority...guarantees of individual liberty...and freedom from political oppression. ...read more.

When examining the pre-WWII and WWII circumstances of both the United States and the Soviet Union, it becomes evident that the elemental canon of each country conflicted. The three most prominent fundamental differences are bipolar outlooks, aspirations and dogmas. When examining documents, there is a plethora of evidence supporting both the Revisionist and the Orthodox viewpoints, and because of this evidence the Post-Revisionist position is the accurate assessment of blame. Both the Soviet Union and the United States purposely aggravated each other and prevented each other from obtaining any sort of secure standing both in the international and domestic sense. When examining these activities years after they happened, it is easy to conclude that both the United States and Soviet Russia were culpable for starting the Cold War. However, during the tense years, such as the Korean and Vietnam Wars, this inference was not as easily made. Thus, those belonging to the Revisionist and Orthodox tenets only need to look at the Cold War overall to gain the perspective necessary to gage an educated proposal for blame and not just focus on isolated events. Again referring back to the quotation by Eisenhower, we must always remember those immortal words and learn from past mistakes and realize that communication and diplomacy are the supreme exemplars of brotherhood and unity, more so that paranoia and arms races will ever be. We must never repeat the mistakes of the past and never again utter Churchill's famous words of the 'iron curtain' to report on international events: From Stettin in the Baltic to Trieste in the Adriatic, an iron curtain has descended across the Continent....If the western democracies stand together in strict adherence to the principles of the United Nations Charter, their influence for furthering these principles will be immense and no one is likely to molest them. If, however, they become divided or falter in their duty, and if these all-important years are allowed to slip away, then indeed catastrophe may overwhelm us all. ...read more.