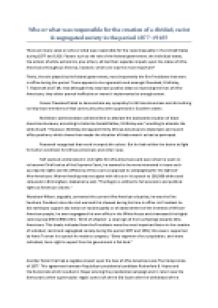 Who or what was responsible for the creation of a divided, racist &amp; segregated society in the period 1877-1918?

﻿Who or what was responsible for the creation of a divided, racist & segregated society in the period 1877-1918? ________________ There are many views on who or what was responsible for the racial inequality in the United States during 1877 and 1918. Factors such as the role of the federal government, the individual states, the actions of white extremists, plus others, all had their separate impacts upon the status of Afro-Americans throughout America, however, which one was the most important? Firstly, the role played by the federal government; most importantly the five Presidents that were in office during the period. There appears to be a general trend amongst Cleveland, McKinley, T. Roosevelt and Taft, that although they may have positive ideas to improving the lives of Afro-Americans, they either proved ineffective or weren?t implemented to enough extent. Grover Cleveland failed to demonstrate any sympathy for African-Americans and did nothing to help those members of that community who were oppressed in Southern states. McKinley?s administration achieved little to alleviate the backwards situation of black Americans because, according to historian Gerald Bahles, McKinley was "unwilling to alienate the white South." However, McKinley did appoint thirty African-Americans to diplomatic and record office positions, which shows that maybe the situation of blacks wasn?t as bad as portrayed. ...read more.

In 1896 there were 130,000 black voters, but by 1900 there were only 5300, indicating how the states were responsible for the racist feelings in the USA. Not only that, there was unofficial segregation in the northern cities in housing jobs and schooling which shows how the individual states just simply didn?t want Afro-Americans there despite welcoming millions of other immigrants from all over the world. This view is supported by Thurgood Marshall, ?The United States has been called the melting pot of the world. But it seems to me that the coloured man either missed getting into the pot or he got melted down.? The Supreme Court was also responsible for the social problems, throughout the period they upheld regulations and overturned many Afro-American appeals. In the ?Plessy v Ferguson? case of 1896, Plessy challenged the legality of Louisiana railroad company?s separate cars; the Court declared that Louisiana had not violated the 14th Amendment. The 1899 ?Cumming v Board of Education? case where the Court extended the ?separate but equal? principle to schools. Furthermore the 1898 ?Mississippi v Williams? case where the Supreme Court upheld new voting regulations. All these cases clearly show how the Supreme Court has no interest in working towards equal rights despite clear discrimination and prejudice, illustrating how the Supreme Court were the most important factor behind the segregation in American society 1877-1918. ...read more.

using his political contacts to derail racist legislation.? This statement by Harlan counters Randolph?s view and suggests that blacks were not responsible for their unequal treatment. Mark Meigs argues that World War One was also a factor in the social problems for blacks in his book Optimism at Armageddon. ?In almost every sense, however, Afro Americans were denied the ?fair treatment and recompense accorded other soldiers?.? Meigs argument is supported by the fact that of the 400,000 black men in uniform, only a tenth were ever actually designated as combat troops. Furthermore, despite tremendous bravery and an unbelievable military record no Afro-American soldier received any American military decoration even though the Harlem Hellfighters unit were awarded the French Regimental Croix de Guerre and 171 received separate decoration, including Henry Johnson, who became well known for his heroics. In conclusion, I believe that the lack of action from the Presidents was the main cause for a racist and segregated society in America, 1877-1918. This is because the obvious absence of interest by Cleveland, McKinley, T.Roosevelt and Taft sends a clear message to other Americans, that if the leader of the greatest nation in the world isn?t interested in civil rights for blacks, then why should they be, evidently causing the rift in society to form leaving Afro-Americans with no equality, little freedom and almost no hope. ...read more.