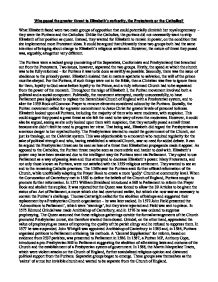 Who posed the greater threat to Elizabeth

Who posed the greater threat to Elizabeth's authority, the Protestants or the Catholics? What Elizabeth faced were two main groups of opposition that could potentially diminish her royal supremacy - they were the Puritans and the Catholics. Unlike the Catholics, the puritans did not necessarily want to strip Elizabeth of her position as queen. Instead, they wanted for Elizabeth to remain in power, on the condition that she implemented more Protestant ideas. It could be argued that ultimately these two groups both had the same intention of bringing about change to Elizabeth's religious settlement. However, the nature of threat they posed was, arguably, altogether very different. The Puritans were a radical group (consisting of the Separatists, Conformists and Presbyterians) that branched out from the Protestants. Two issues, however, separated the two groups. Firstly, the speed at which the church was to be fully reformed - for Puritans it was to be done as swiftly as possible. Secondly, there was the issue of obedience to the princely power. Elizabeth insisted that in matters apathetic to salvation, the will of the prince must be obeyed. For the Puritans, if such things were not in the Bible, then a Christian was free to ignore them: for them, loyalty to God came before loyalty to the Prince, and a truly reformed Church had to be separated from the power of the monarch. ...read more.

Thomas Cartwright called for the abolition of bishops and suggested their replacement by a Presbyterian Church organisation - he was later sacked. In 1572 John Field presented the 'Admonitions to Parliament', which were 'warnings', but they were rejected and Field was sent to prison. In 1575 Edmund Grindal was made Archbishop of Canterbury, and in 1576 he was ordered to suppress prophesying. The Queen assumed that these religious gatherings outside the formal arrangements of the Church promoted Presbyterian unrest, she therefore wanted them closed. Grindal, on the other hand, appreciated the value of prophesying as means of improving the quality of the parish clergy and he refused to suppress them. In 1577 he was suspended. John Whitgift was appointed Archbishop of Canterbury in 1583 and, in 1584, Puritans organised petitions to Parliament criticising his methods. A 'General Supplication' for reform, based on evidence from 2537 parishes, was presented to Parliament in 1586. In 1587, a Puritan MP, Anthony Cope, introduced a pro-Presbyterian Bill to Parliament suggesting the abolition of all existing laws and customs of the Church and the establishment of a Presbyterian system of government. In 1588, the Martin Marprelate Tracts, which were violent attacks on the Church of England, further scandalised religious opinion and distanced political support from the Puritans. Separatist groups began to emerge. These groups saw themselves as the 'saints' of a true but invisible church and wanted to be separate from the Church of England. During the 1560s there was little threat from Catholicism. ...read more.

In 1583 the Jesuits and William Allen became a part of the Throckmorton Plot. It involved French Catholics invading England to liberate Mary, Queen of Scots and to start a Catholic rising. Around the same time the Protestant leader of the Dutch was assassinated which only intensified the threat. An Act of 1581 redefined treason to include those who withdrew English subjects from allegiance to the Queen. Recusancy fines were increased and in 1585 Parliament ordered the expulsion of priests, and it now became treason to become a priest, with the death penalty for those who helped priests in any way. This being said, priests continued practicing - for such truly dedicated men, imprisonment and torture were an accepted risk. It should not be imagined, however, that even committed Catholics automatically supported the Mission's aim of removing Elizabeth from power. Many were opposed to this and they showed their loyalty in not rising to meet the Armada of 1588. Many recusants wished to fight against the Spanish, once more illustrating that patriotism and the defence of a hereditary monarch were greater priorities than personal religious conviction. In conclusion, I feel it is simplistic to state which group, the Puritans or the Catholics, posed the greatest threat to Elizabeth's authority - there were different levels of threat from the two groups at different times. We can instead only assess how renowned the groups remained after the time of Elizabeth. By the time of Elizabeth's death in 1603 the failure of Catholicism was overwhelming. ?? ?? ?? ?? ...read more.