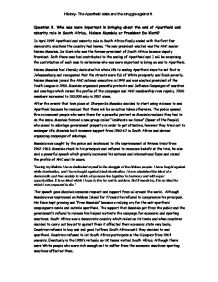 Who was more important in bringing about the end of Apartheid and minority rule in South Africa, Nelson Mandela or President De Klerk?

Question 3. Who was more important in bringing about the end of Apartheid and minority rule in South Africa, Nelson Mandela or President De Klerk? In April 1994 Apartheid and minority rule in South Africa finally ended with the first fair democratic elections the country had known. The new president elected was the ANC leader Nelson Mandela. De Klerk who was the former president of South Africa became deputy President. Both these men had contributed to the ending of Apartheid and I will be examining the contribution of each man to determine who was more important in bring an end to Apartheid. Nelson Mandela had literally dedicated his whole life to ending Apartheid since he set foot in Johannesburg and recognised that the streets were full of White prosperity and Black poverty. Nelson Mandela joined the ANC national executive in 1949 and was elected president of the Youth League in 1950. Mandela organized peaceful protests and Defiance Campaigns of marches and meetings which raised the profile of the campaigns and ANC membership rose rapidly. 7000 members increased to 100.000 only in 1952 alone. After the events that took place at Sharpeville Mandela decided to start using violence to end Apartheid because he realized that there will be no action taken otherwise. The police opened fire on innocent people who were there for a peaceful protest so Mandela realized they had to do the same. ...read more.

At the end the government gave way to Mandela's point and so achieved true democracy. He also reassured the White people that he did not want to take revenge for apartheid or replace anti Black racism with anti White racism. "Tonight I am reaching out to every single South African, black and white, from the very depths of my being. A white man, full of prejudice and hate, came to our country and committed a deed so foul that our whole nation now teeters on the brink of disaster. A white woman, of Afrikaner origin, risked her life so that we may know, and bring to justice, this assassin. The cold-blooded murder of Chris Hani has sent shock waves throughout the country and the world. ...Now is the time for all South Africans to stand together against those who, from any quarter, wish to destroy what Chris Hani gave his life for - the freedom of all of us." Mandela did not think of the White Africans as wrong and he did not feel they should be punished. This made a lot White people support and believe in him too. Mandela achieved the constitutional settlement in November 1993; he then led ANC to victory in the elections on 27th April 1994. President De Klerk came to power in 1990 after ill health had forced him to resign and leave responsibility with President PW Botha. ...read more.

He was involved in as a major player in the struggle against apartheid for a much longer time than De Klerk. Mandela never gave up in what he believed even after he had been arrested. His strong personality gained him support worldwide and put him at the forefront of the ANC. He helped the ANC stay at the forefront of the struggle. Even while in prison his fame spread worldwide and his reputation made him a leading figure in the struggle against apartheid. When the pressure against Apartheid finally made De Klerk look for compromise, Mandela formed a bridge between the two sides. He was the only person whose fame and respect meant that both sides would listen to his views and make deals with him. Because of this he was a vital need in negotiations because his views were considered wisely. Many politicians could have done what De Klerk did but only Nelson Mandela with his immense fame, high reputation and stern determination could have kept the negotiations going. He was determined to get his way and he that is why he achieved full democracy. From the early days before Sharpeville until its final successful conclusion, Mandela was the most outstanding figure in the struggle against and the process of abolition of apartheid. If it was not for Mandela's determination apartheid may have token a very long time to be abolished or may not have even been abolished at all. History- The Apartheid state and the struggle against it. ...read more.