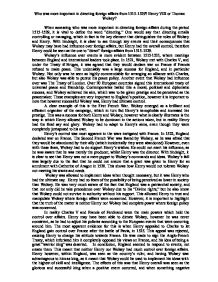 Who was more important in directing foreign affairs from 1515-1529? Henry VIII or Thomas Wolsey?

Who was more important in directing foreign affairs from 1515-1529? Henry VIII or Thomas Wolsey? When accessing who was more important in directing foreign affairs during the period 1515-1529, it is vital to define the word "directing." One would say that directing entails controlling or managing, which in fact is the key element that distinguishes the roles of Wolsey and Henry. With hindsight, it is clear to see through key events and their consequences that Wolsey may have had influence over foreign affairs, but Henry had the overall control, therefore Henry could be seen as the one to "direct" foreign affairs from 1515-1529. Wolsey's influence over events is more evident between 1515-1521, where meetings between England and international leaders took place. In 1521, Wolsey met with Charles V, and under the Treaty if Bruges, it was agreed that they would declare war on France if Francis refused to make peace. ...read more.

Wolsey had to adapt to Henry's aims, even though they were completely juxtaposed to his own. Henry's control was most apparent in the wars instigated with France. In 1522, England declared war on France. The Second French War was feared by Wolsey, as he was afraid that they would be abandoned by their ally (which incidentally they were abandoned) However, even with these fears, Wolsey had to do support Henry's wishes. He could not exert his influence, as he was aware that he was merely the producer, whilst Henry was the director. With hindsight, it is clear to see that Henry was not a mere puppet to Wolsey's commands and ideas. Wolsey's fall was largely due to the fact that he could not ensure that a grant was given to Henry for an annulment with Catherine of Aragon in 1528. This shows how Henry would not tolerate Wolsey not meeting his wants and needs. ...read more.

This appeal was rejected, causing Henry to change his attitude towards France. He was made to sign the Anglo-French Treaty, which infuriated him it completely opposed his views on France, and his idea of being a great "warrior king" was deserted. In conclusion, England seemed to respond to events, not create them. This meant that neither Henry nor Wolsey had much control over foreign affairs. Henry however, within England, was seen as the country's ruler, and having Wolsey was advantageous to him as king, as it meant that Wolsey could be used to implement his ideas with the highest of skill and intelligence. The effects of this was that Henry overall was seen as the glorious and successful king when a positive event occurred, and when something negative happened, Henry could easily use Wolsey as a scapegoat to shift the blame. Wolsey aimed to please Henry, even if this meant casting aside his own humanistic aims; therefore he was directed by Henry, whilst he produced the finer details, which ultimately were overlooked and controlled by Henry. ?? ?? ?? ?? ...read more.