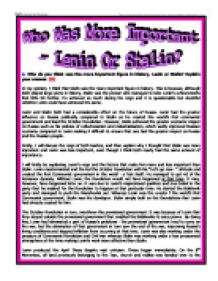 Who Was More Important - Lenin Or Stalin?

4. Who do you think was the more important figure in history, Lenin or Stalin? Explain your answer. (8) In my opinion, I think that Stalin was the more important figure in history. This is because, although both played large parts in history, Stalin was the person who managed to take Lenin's achievements that little bit further. He achieved so much during his reign and it is questionable but doubtful whether Lenin could have achieved the same. Lenin and Stalin both had a considerable effect on the future of Russia. Lenin had the greater influence on Russia politically compared to Stalin as he created the world's first communist government and lead the October Revolution. However, Stalin achieved the greater economic impact on Russia such as his policies of collectivisation and industrialisation, which vastly improved Russian economy compared to Lenin making it difficult to ensure that one had the greater impact on Russia and the Russian people. Firstly, I will discuss the reign of both leaders, and then explain why I thought that Stalin was more important and Lenin was less important, even though I think both nearly had the same amount of importance. I will firstly be explaining Lenin's reign and the factors that make him more and less important than Stalin. Lenin masterminded and the led the October Revolution with his "Let's go now..." attitude and created the first Communist government in the world - a feat itself. ...read more.

Lenin, as the supreme leader of the USSR, was criticised for leaving his party in a bad condition at the time of his death. Although Trotsky was favourite for succeeding Lenin, he had been described as arrogant and Stalin as rude in his final testament. This was the reason why it was not published, as it also contained criticisms of other leading Communists, which could have been damaging. If it had of been published, it would certainly have damaged Stalin. Now, I will be looking at Stalin's reign, the importance of his actions and the consequences of his policies or events. Firstly, as soon as he came into power, he was determined to modernise the USSR so that it could meet the challenges that were about to come. He took over a country in which almost all the industry was concentrated in just a few cities and whose workers were unskilled and poorly educated. Many regions of the USSR were in the same backward state as they had been a hundred years earlier. To do this, he launched the Five-Year Plans and Collectivisation. Lenin had in fact started Collectivisation but decided to retreat. During Collectivisation, he wanted to modernise agriculture, but instead 13 million people died. This was related to his use of terror, which had continued from Lenin's reign. Although, I think that Stalin took the use of terror further than Lenin would ever have been prepared to go. ...read more.

Stalin had achieved a lot by improving the economy of Russia greatly and improving the lives of many Russian people, using both good and bad ways to do this. Stalin was admired by the Russian people and he, his style and methods of government were popular. To conclude, there were many differences and similarities between the two leaders. Mainly, Stalin used what Lenin had done as a foundation and built on it in both good and bad ways. He was able to use a large amount of terror simply because Lenin had but not on a large scale. Although Lenin achieved so much during his reign I simply think he was more important because if necessary then someone else would have kick-started the Revolution and taken his place in history. This is why I think that he is less important. Whereas, I do not think it would be possible for anyone to replace Stalin in history, as no one would be prepared to go the lengths he did for his country. In conclusion, Stalin was the more important figure in history. He had the power to make certain things happen and he used it to the advantage of his country. It can be argued that the death of all the millions of people did not justify the result which was Russia being a modern, industrialised country and being able to resist Germany. However, it cannot be argued that Stalin did not have any positive effect on Russia because he did. In my opinion, he had the biggest impact on Russia. A bigger impact that Lenin could ever have dreamed for. ...read more.