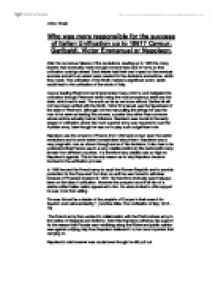 Who was more responsible for the success of Italian Unification up to 1861? Cavour, Garibaldi, Victor Emmanuel or Napoleon.

Who was more responsible for the success of Italian Unification up to 1861? Cavour, Garibaldi, Victor Emmanuel or Napoleon. After the numerous failures of the revolutions, leading up to 1860 the many leaders had eventually made enough compromises and reforms so that unification could go ahead. Each leader had their own impact on the eventual success and all to an extent were needed for the decisions and actions, which they made. The unification of the North marked a significant event, which would lead to the unification of the whole of Italy. Cavour leading Piedmont had implemented many reforms and instigated the unification through Piedmont which being the most prosperous state was the state, which had to lead. The south as far as we know without Garibaldi will not have been unified with the North. Victor Emmanuel was the figurehead of the state of Piedmont, although not the man pulling the strings he was the man to be seen as leading the process, a poster boy rather than someone whose actions actually had an influence. Napoleon was crucial in the early stages of unification where his much superior army was required to oust the Austrian army, later though he was not to play such a significant role. ...read more.

Cavour therefore sent his army to stop the revolutions, the two sides met and peace was brokered with Garibaldi greeting Victor Emmanuel as "I salute the first King of Italy." Garibaldi was not the most important figure in the beginnings of the unification of the North and during the actual process. He was a fighter not a organizer, however without him the revolutions of the Southern states would not have begun and the intervention of Cavour would not have happened resulting in the unification of both North and South. Therefore Garibaldi we could say was the key player in the final unification of the whole kingdom. Victor Emmanuel II succeeded from, his father Charles Albert in 1840. He followed on from a father who had been a prominent figure in the attempted revolutions of 1848 and before. Unfortunately Victor Emmanuel was not to live up to his father's footsteps. His role was that of a figurehead, never really getting involved in politics, his only role was to be seen as the future King of Italy. Saying that though he did have a contributory role in which would trigger a snowball effect in the process of receiving foreign support. The King was said to be "Always happiest in either the barracks, the stables or the hunting field." ...read more.

The result was that in the end the whole of Italy was united. It was not as Cavour had wanted it to be "Cavour however envisaged only an enlarged Piedmont, which would include Lombardy and Venetia." However Cavour was willing to adapt and this shows his content for the unification. If we look at Cavour's role we can see that without him the circumstances for unification would not have evolved and unification may not have happened. A quote from the English poet George Meredith sums up the achievements of the leaders; "We think of those Who blew the breath of life into her frame: Cavour, Mazzini, Garibaldi: Three: Her Brain, her soul, her sword; and set her free From Ruinous discords." In summary if we look at the different figures and their achievements Cavour set up the Piedmont to lead the unification, Napoleon helped defeat the Austrians, Victor Emmanuel acted as the much-needed figurehead and Garibaldi brought the South into the equation. Therefore in essence each one needed each other as much as themselves, without one the process would not have worked. However saying that it is clear that Cavour stands out amongst the rest. Without Cavour many of the circumstances, which enabled the other leaders to come into play would not have been set up. Cavour organized and then led Piedmont to establish the lead state for the unification process. Joshua Heugh ...read more.