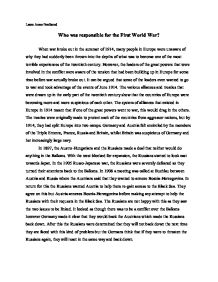 Who was responsible for the First World War?

Who was responsible for the First World War? When war broke out in the summer of 1914, many people in Europe were unaware of why they had suddenly been thrown into the depths of what was to become one of the most terrible experiences of the twentieth century. However, the leaders of the great powers that were involved in the conflict were aware of the tension that had been building up in Europe for some time before war actually broke out. It can be argued that some of the leaders even wanted to go to war and took advantage of the events of June 1914. The various alliances and treaties that were drawn up in the early part of the twentieth century show that the countries of Europe were becoming more and more suspicious of each other. The system of alliances that existed in Europe in 1914 meant that if one of the great powers went to war, this would drag in the others. The treaties were originally made to protect each of the countries from aggressor nations, but by 1914, they had split Europe into two camps. Germany and Austria felt encircled by the members of the Triple Entente, France, Russia and Britain, whilst Britain was suspicious of Germany and her increasingly large navy. In 1897, the Austro-Hungarians and the Russians made a deal that neither would do anything in the Balkans. ...read more.

These crises also led to the beginning of military conversations between Britain and France where the two countries discussed what they would do if they were fighting together against Germany. This if soon became when, tying Britain and France together even more strongly. France and Britain were not the only ones discussing what to do in the war that seemed imminent. The Germans had also planned how they could act if they were to have a war on two fronts. In the Schlieffen Plan said that they would first have to take out the French and, because Russia would take a long time to mobilise, then turn to the eastern front to avoid a war on two fronts. The military were also influencing the decisions of the On June 28th, 1914, the heir to the Austrian throne was assassinated. This was the spark that caused the whole of Europe to be thrown into chaos. However, it was not the most important cause of the following conflict. Many of the things that led to the problem had been building up for a long time adding to the tension that meant that a war was almost inevitable. When the Austrian heir was assassinated, the cabinet immediately held a meeting in Vienna to discuss what to do. They could not decide whether to attack Serbia and risk Russian intervention, or not to take any action and risk the downfall of an already weak empire. ...read more.

However I think that Germany played a large part in turning the events of June and July 1914 into war. It is clear by the conversations between Kaiser Wilhelm and von Moltke that the Germans wanted the war to start around the same time that it did eventually start, however this does not make them solely responsible. The army was able to take advantage of the assassination in Sarajevo but if this had not happened, something else would have caused the spark which would release the tension that had built up in Europe. Without this tension the war would probably have been less likely to have taken place and as all the nations were responsible for the build up of this tension, they are all partly responsible for the war. We can see by the military conversations that it was not just Germany who were preparing for war. It could be argued that it was down to Austria to decide what to do when the Serbians assassinated the heir to their throne and had they not sent Hoyos to Germany, they could have avoided war. The Germans may have thought that by issuing an ultimatum to Russia, they would back down as they had previously after the Buchlau crisis of 1909. Despite all of this I think that the evidence found by Immanuel Geiss makes the argument that Germany wanted a war and that they wanted the war to go ahead in the summer of 1914 more substantial and therefore I think that Germany are mainly responsible for the war starting when it did. Laura Anne Penfound ...read more.