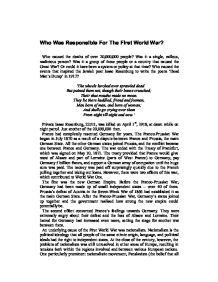 Who Was Responsible For The First World War?

Who Was Responsible For The First World War? Who caused the deaths of over 20,000,000 people? Was it a single, callous, malicious person? Was it a group of these people or a country that caused the Great War? Or could it have been a system or policy at that time? Who caused the events that inspired the Jewish poet Isaac Rosenburg to write the poem 'Dead Man's Dump' in 1917? 'The wheels lurched over sprawled dead But pained them not, though their bones crunched; Their shut mouths made no moan. They lie there huddled, friend and foeman, Man born of man, and born of woman; And shells go crying over them From night till night and now.' Private Isaac Rosenburg, 22311, was killed on April 1st, 1918, at dawn while on night patrol. Just another of the 20,000,000 then. France had completely resented Germany for years. The Franco-Prussian War began in July 1870 as a result of a dispute between France and Prussia, the main German State. All the other German states joined Prussia, and the conflict became one between France and Germany. The war ended with the Treaty of Frankfurt, which was signed on May 10, 1871. The treaty provided that France would give most of Alsace and part of Lorraine (parts of West France) ...read more.

Southeast Europe is known as The Balkans. For centuries, the powerful Turks had ruled it, but when their empire began to fall apart in the 19th century, the Austro-Hungarian Empire swooped in and took much of the Balkans for itself. Only Bosnia, Albania and Montenegro were still ruled by the Turks and four countries gained independence - Greece, Rumania, Bulgaria and Serbia. Austria annexed Bosnia and Herzegovina in 1908. The Russians started to get very friendly with the people in the Balkans, persuading them to rebel against Turkish rule with a theory called Panslavism. Many Russians were Eastern Orthodox Christian Slavs, and the people in the Balkans were too. The Russians told them that they would help them if they tried to gain independence from Turkish rule, but they were actually manipulating these people for their own gain. Russia wanted the Dardanelles, a narrow strip of sea which connected the Black Sea to the Mediterranean, because all of their Northern ports were frozen in winter, and the Dardanelles provided a route into the ocean. Turkey still controlled the Dardanelles at this time, but if the Slavic people of the Balkans rebelled, Turkey would weaken and Russia would have a chance to gain control of the Dardanelles. This angered Austria, as they hated Serbia, now on friendly terms with Russia. ...read more.

They intended to invade using the Schlieffen Plan - they would attack France going through Belgium, and deal with Russia after an easy surprise victory over France. However, this was not going to work. Belgium was a neutral country, but Britain wanted to help them when the strong German forces invaded them. Britain's entry into the war was on August 4th, 1914. The First World War was already in motion. In conclusion, I have found that no one person was to blame for one of the worst wars in human history. Many countries contributed to the tension and hatred surrounding the pre-war years, but more to blame, in my opinion, were certain systems. Imperialism, nationalism and the alliance system all greatly contributed to this tension and Gavrillo Princip's act simply pushed everyone over the edge. Even if he had been stopped, war would have probably still broken out - war was imminent before the assassination, not directly after it. Unfortunately, mankind did not learn from the First World War, but hopefully if we look back, war can be avoided in the future for good. And as the poet Wilfred Owen wrote in 'Dulce et Decorum Est': "My friend; you would not tell with such high zest To children ardent for some desperate glory, The old Lie: Dulce et decorum est Pro patria mori"* Sarah Watson *The last two lines of this poem mean 'It is a good and fitting thing to die for your country'. ...read more.