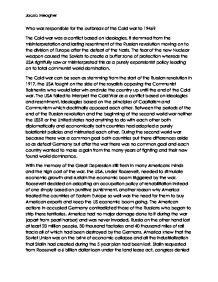 Who was responsible for the outbreak of the Cold war to 1946?

Who was responsible for the outbreak of the Cold war to 1946? The Cold war was a conflict based on Ideologies, it stemmed from the misinterpretation and lasting resentment of the Russian revolution moving on to the division of Europe after the defeat of the Nazis. The fear of the new Nuclear weapon caused the Soviets to create a buffer zone of protection whereas the USA rightfully saw or misinterpreted this as a purely expansionist policy leading on to total communist world domination. The Cold war can be seen as stemming from the start of the Russian revolution in 1917, the USA fought on the side of the royalists opposing the Communist Bolsheviks who would later win and rule the country up until the end of the Cold war. The USA failed to interpret the Cold War as a conflict based on ideologies and resentment, ideologies based on the principles of Capitalism and Communism which doctrinally opposed each other. Between the periods of the end of the Russian revolution and the beginning of the second world war neither the USSR or the United states had anything to do with each other both diplomatically and economically both countries had adopted a purely isolationist policies and mistrusted each other. During the second world war because there was a common goal both countries put there differences aside so as defeat Germany but after the war there was no common goal and each country wanted to make a gain from the many years of fighting and their new found world dominance. ...read more.

The USA saw the actions of the USSR in the aftermath of WW2 as purely expansionist when it can easily be argued as a protectionist measure. Stalin found out about the atomic bomb in 1943 and promptly started his own project, when in 1945 at the Potsdam conference Truman told Stalin that he had a new weapon and was ready to use it, this created systemic fear throughout the Soviet government as they were now unprotected from an attack from there old ally the USA. Stalin promptly stated to one of his aids at Potsdam "...talk to Kurcheckov..." who was the scientist in charge of creating a Soviet atom bomb and told him to speed things up. Stalin felt that the USSR was now defenseless he decided that he needed to create a sphere of influence to try and protect the USSR from a possible attack from the USA. At that point in time the only means of detonating a Nuclear bomb was to drop it from a plain, the more land a potential attacker had to fly over to get to Russia and Moscow the safer it was. This is one of the reasons why Stalin expanding into countries surrounding the USSR to create a "buffer zone". America saw Russia's actions as purely expansionist, when Roosevelt died and Truman became President he stated that he was "tired of babysitting the Soviets who understand only an iron fist and strong language". ...read more.

on the Soviet Union. There can never be a definitive answer defining the single action that started the cold war nor who was to blame for its embarkation. Its originality can be traced to the Russian revolution and in latter years while the Soviets can be seen as the aggressor in trying to militarily dominate Europe the USA can be seen equally guilty as attempting to dominate the world with its economic might. The opposing ideologies of Communism and Capitalism are simply, opposing, Karl Marx stated that only one ideology will outlast the other. The fact that the peoples of Eastern Europe especially in Poland wished to embrace capitalism does not prove that the USA was in the right by denying an equal playing field to the USSR by giving economic aid. It is even plausible to assume that if the USSR was not economically destroyed Stalin would not have felt the need to expand into Western Europe. The Soviets can be seen as the more guilty party in the Cold war as it is the one who is usually identified as the aggressive party, but the USA must also share the blame as it tried to spread the influence of capitalism so as to aid its economic gains. Therefore in conclusion it is both the USSR and the US who was responsible for the outbreak of the cold war. ?? ?? ?? ?? Jacob Meagher ...read more.