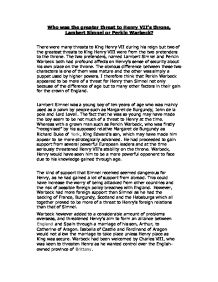 Who was the greater threat to Henry VII's throne, Lambert Simnel or Perkin Warbeck?

Who was the greater threat to Henry VII's throne, Lambert Simnel or Perkin Warbeck? There were many threats to King Henry VII during his reign but two of the greatest threats to King Henry VIII were from the two pretenders to the throne. The two pretenders, named Lambert Simnel and Perkin Warbeck both had profound affects on Henry's sense of security about his own place on the throne. The obvious difference between these two characters is one of them was mature and the other was simply a puppet used by higher powers. I therefore think that Perkin Warbeck appeared to be more of a threat for Henry than Simnel not only because of the difference of age but to many other factors in their gain for the crown of England. Lambert Simnel was a young boy of ten years of age who was mainly used as a pawn by people such as Margaret de Burgundy, John de la pole and Lord Lovell. The fact that he was so young may have made the boy seem to be not much of a threat to Henry at the time. Whereas with a grown man such as Perkin Warbeck, who was firstly "recognised" by his supposed relative Margaret de Burgundy as Richard Duke of York, King Edward's son, which may have made him appear to be more strategically advanced. ...read more.

Margaret was the sister of Richard III and wanted revenge against the usurper (Henry) who had taken his throne and lead to his death in battle. Margaret had also recognised Simnel as her nephew, which could have influenced others to follow and support him in his claim too. She therefore was the most powerful of Simnel's supporters. Warbeck did not receive as bigger support as Lambert had from Margaret, he had to get troops from elsewhere and even re-sparked the Cornish rebellion in the South of England in an attempt to match the kings forces. This attempt proved to be as unsuccessful as the first Cornish rebellion and resulted in Warbeck's final capture. When this is compared with Simnel's battle it appears to be of less consequence as the Battle of Stoke actually involved the King in the Battle, similar to the Battle with King Richard III and Henry the 'pretender'. The Earl of Lincoln, John de la Pole also joined the cause for Lambert and fled overseas to Ireland to return on the 4th June 1487 with his army to challenge the king. This didn't prove to be a good move as the attack failed and the Earl of Lincoln died in the battle which may have shown Simnel's fighting as not a well thought through plan and therefore an easy opponent for Henry. ...read more.

Henry may have also used this opportunity to show others just how much of a threat he thought the boy was, as he employed him to work in the Royal Kitchens. He seemed as though he was never actually worried about the boy's claim at all. After careful consideration I have concluded that Perkin Warbeck appeared to be the greatest threat to Henry as Perkin Warbeck had extensive support from Europe, threatened Henry's foreign policy and had noticeable support from various nobles such Margaret de Burgundy who had learned from her previous mistake. It took eight years to finally capture him and have him executed which finally eliminate the ongoing threat. Lambert's rebellion was dangerous, as his uprising was a similar one to that of King Henry himself, however he did not appear to be such a great threat as his threat diminished to the point where he became a servant in the royal kitchens after the act. Henry faced no further challenges from armed forces, he had treaties with France and Scotland to strengthen foreign policies, secured two marriages which brought peace and secured his dynasty. Warbeck was perhaps the most serious threat Henry had faced up to that point, and afterwards too. ...read more.