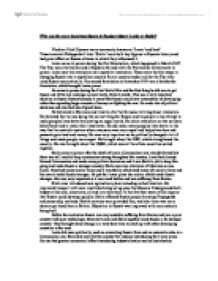 Who was the more important figure in Russian history Lenin or Stalin?

Who was the more important figure in Russian history Lenin or Stalin? Vladimir Ilich Ulyanov more commonly known as 'Lenin' and Iosif Vissarionovich Dzhugashvili later 'Stalin' were both key figures in Russian history and had great effect on Russia citizens in which they influenced it. Lenin came to power during the first Revolution, which happened in March 1917. The Tsar was overthrown and a Republic formed with the Provisional Government in power. Lenin saw this revolution as a capitalist revolution. These were the first steps in changing Russia into a capitalism country from a country under rule by the Tsar who ruled Russia autocratically. The second Revolution in November 1917 was a Bolsheviks Revolution, which brought Lenin power. He came to power during the First World War and the first thing he did was to get Russia out of the war and sign a peace treaty, Brest-Litovsk. This was a very important decision in Russia history because it meant that Russia could now concentrate on developing rather than spending huge amounts of money on fighting the war. ...read more.

They had many similar views and it was Stalin which took many of Lenin's views and his own to make Russia stronger. He put the 5-year plans into action, which made Russia stronger, this was very important as it was weak before and was suffering from famine. Stalin also introduced new agriculture plans including collectivisation. He improved transport with new road links being set up plus the Moscow Underground built. Industry like coal, electricity, oil and iron were built in the first few years of his reign so that Russia could develop quickly. Stalin effected Russia people by using Propaganda and censorship methods. Health services were provided free, and also there was more doctors per head than in Britain. Education in Russia was improved with more schools being built. Before the revolution Russia was very unstable suffering from famine and was a poor country with poor technology. However Lenin and Stalin together made Russia a far stronger country. They brought about change in a very short time to catch up with other developing countries in the west. ...read more.

When Stalin came to power there were other strong candidates for the job such as Trotsky who can have done as good as job. Stalin was not necessarily stronger than Trotsky but he used trickery to become the head of state. The job Stalin did when he did come to power was very good and helped Russia progress very quickly. However there were equal talented characters that could have done the job. In Lenin's case there were not as many strong candidates and certainly no one who could have done a good as job as Lenin did. It is also possible that if Lenin was not shot he would have done a better job than Stalin actually did even though he brought Russia along very quickly making them a industrial country instead of agricultural one. Due to this I believe that Lenin was a more important in Russia history as if there was no Lenin then there would be no Stalin. Stalin was more like the builder who built on Lenin's success. Therefore it was Lenin who was the more important figure in Russia history. ...read more.