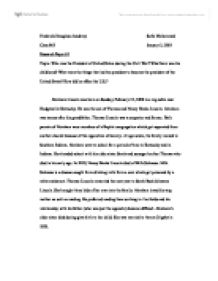 Frederick Douglass Academy Sofia Mohammed Class 805 January 2, 2003 Research Paper #1 Topic- Who was the President of United States during the Civil War? What/how was his childhood? What were the things that led the president to become the president of the United States? How did he affect the U.S.? Abraham Lincoln was born on Sunday, February 12, 1809 in a log cabin near Hodgenville Kentucky. He was the son of Thomas and Nancy Hanks Lincoln. Abraham was names after his grandfather. Thomas Lincoln was a carpenter and farmer. Both parents of Abraham were members of a Baptist congregation which got separated from another church because of the opposition of slavery. At age seven, the family moved to Southern Indiana. Abraham went to school for a period of time in Kentucky and in Indiana. He attended school with his older sister Sarah and younger brother Thomas who died in his early age. In 1818, Nancy Hanks Lincoln died of Milk Sickness. Milk Sickness is a disease caught from drinking milk from a cow which got poisoned by a white snakeroot. ...read more.

His interest in politics renewed by the passage of The Kansas-Nebraska Act in 1854. He ran fir U.S senate and lost. In 1856, he got support from the Republican Vice- Presidential nomination. In 1856, he gave his "Lost Speech" and in 1857, he opposed the Dread Scott decision and gave his famous "House Divided" speech on June 16, 1858. Lincoln engaged in a series of debates with Stephen A. Douglas in 1858. Lincoln was against the spread of slavery into the new territories, but was not an abolitionist. Douglas won the senatorial race but was Lincoln who won the recognition of the nation. In 1860, he continued stealing the nation's ears by his speech at the Cooper Institute in New York. Lincoln won on the third ballot for The Republican Presidential nomination in 1860. On November 6, 1860, Lincoln was elected for the 16th president and Hannibal Hamlin was the Vice President. Lincoln defeated John C Breckinridge, John Bell and Douglas, In February of 1861, the Lincoln family left to Washington D.C. The President started wearing a beard because an eleven years old girl suggested it. ...read more.

He spoke about supporting voting rights for certain blacks. On April 14, 1865, the Lincolns went to a play called "Our American Cousin" at the Ford Theatre. At 10:15pm (during the play), John W. Booth (who is a racist Southern sympathizer who heard Lincoln speak in front of the White House, whom also hated everything about Lincoln) entered the State Box and shot Lincoln on the back of his head. Lincoln was carried across the street to the Peterson House. The next day, at 7:22am, Lincoln passed away. That was the first Presidential assassination in American history. HI assassination was the result of a deep hatred and division of the time. Lincoln's body was taken to Springfield by train and buried in the Lincoln Tomb in Oak Ridge Cemetery on May 4, 1865. Because of his death, Reconstruction took place without his presence and leadership. "Abraham Lincoln is remembered for his vital role as the leader in preserving the Union during the Civil War and beginning the process that led to the end of slavery in the United States. He is also remembered for his character, his speeches and letters, and as a man of humble origins whose determination and perseverance led him to the nation's highest office." ...read more.