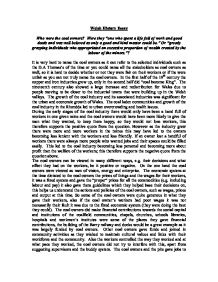 Who were the coal owners? Were they &quot;one who spent a life full of work and good deeds and was well beloved as only a good and kind master could be.&quot; Or &quot;greedy grasping individuals who appropriated an excessive proportion

Welsh History Essay Who were the coal owners? Were they "one who spent a life full of work and good deeds and was well beloved as only a good and kind master could be." Or "greedy grasping individuals who appropriated an excessive proportion of wealth created by the labour of the miners."? It is very hard to name the coal owners as it can refer to the selected individuals such as the D.A Thomas's of the time or you could name all the stakeholders as coal owners as well, so it is hard to decide whether or not they were fair on their workers or if the were unfair as you can not truly name the coal owners. In the first half of the 19th century the copper and iron industries grew up, only in the second half did "coal become King". The nineteenth century also showed a large increase and redistribution for Wales due to people moving to be closer to the industrial towns that were building up in the Welsh valleys. The growth of the coal industry and its associated industries was significant for the urban and economic growth of Wales. ...read more.

The coal owners did make financial contributions towards the social capital and institutions of the coalfield communities, chapels, churches, schools libraries, hospitals and workmen's institutes were some of the places they gave financial contributions, the building of the Barry railway and docks would be a great example as it was largely funded by coal owners. Other coal owners gave funds and joined in community activities as they wished to maintain cultural values and links with their workforce and the community. Also the workers controlled the way they worked and at what pace they worked, the coal owners did not try to interfere with this, apart from suggesting supervisors and the buddy system. The coal owners and the pits gave jobs to the unskilled men who had just left school they could learn all the skills of the trade on the job, so a lot more job opportunities opened up in Wales at this time, due to this people started moving to be closer to the mines and the social life of towns increased, there were clubs, pubs and community centres because of this a lot of young people started moving to the cities. ...read more.

on the political side 29 out of 33 seats fell into Liberal hands in 1880, most of these men were industrialists and manufacturers. The involvement of the coal owners in local administration declined from the 1880s because many coal owners moved away from the colliers to the ports and the owners then delegated there representative function to their professional managerial staff at the colliers. By 1914 most of the largest coal owners had moved away from the actual colliers, and they were much more likely to be found in the Vale than the valleys. Also the men working in the mines had to put up with bad working conditions, such as cramped spaces, lack of air and long hours, however not much could be done to change this because of the geographical position. In conclusion it is unclear whether or not the coal owners were "good" or "bad" as you can't label a specific group of people as coal owners and also as the main coal owners did help out in financial situations in the community however they did not all care for their workers welfare and primarily only cared about profit, so giving the workers poor or little pay in order to maximise profits. ...read more.