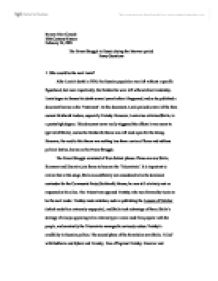 Who would be the next Lenin?

Ramon Diez-Canedo 20th Century History February 26, 2003 The Power Struggle in Russia during the Interwar period Essay Questions 1. Who would be the next Lenin? After Lenin's death in 1924, the Russian population was left without a specific figurehead, but more importantly, the Bolsheviks were left without direct leadership. Lenin began to foresee his death several years before it happened, and so he published a document known as the 'Testament'. In this document, Lenin praised several of the then current Bolshevik leaders, especially Trotsky. However, Lenin also criticized Stalin, to a pretty high degree. This document never really triggered the effects it was meant to (get rid of Stalin), and so the Bolshevik throne was left wide open for the taking. However, the road to this throne was nothing less than a series of fierce and ruthless political battles, known as the Power Struggle. The Power Struggle consisted of four distinct phases. Phase one saw Stalin, Kamanev and Zinoviev join forces to become the 'Triumvirate'. It is important to realize that at this stage, Stalin was definitely not considered to be the dominant contender for the Communist Party (Bolshevik) ...read more.

To begin with, Stalin was General Secretary. This gave him the power to promote people however he wanted. Being the dirty politician that he was, he promoted only his supporters, and this lead to a vast number of the people in the Russian government being supporters of Stalin. Stalin was also heavily favored by the population. He blatantly praised Lenin, something that pleased the Russians very much so. He even tricked Trotsky into missing Lenin's funeral (by giving him the wrong date, according to Trotsky), while he made it certain everyone knew he himself was there, when Trotsky was not, which made him look good in front of the Russians. Stalin also knew his abilities and limitations. He never participated in ideological debates, and seeing as how he was not as intellectually gifted as his contenders, this was a smart move. Many of the strategies that Stalin implemented also helped him. In particular, factionalism helped him tremendously. It basically gave him an excuse to eliminate any possible opposition in a seemingly legal fashion. Using the methods explained above, Stalin was able to completely eradicate his competition and become the new Lenin. ...read more.

Stalin made public many statistics, such as how much pig iron was supposedly to be produced in tons, and many different figures. Stalin's goal was to make Russia make the progress of 50 to 100 years in 10. Obviously, this was absurdly unrealistic, so it was not achieved. Stalin constantly kept on pushing the goals of production, which goes to show the immense effort he was putting in to modernize Russia. This was all good, it helped Russia to become the power house it was during the 20th century, but it did take its tolls, and extremely large tolls they were. Collectivization was the main culprit, after Stalin that is. All the food was taken away from the peasants, so many starved. Those peasants that were wealthier as a cause of the NEP, were attacked by Stalin, and deported to Siberia where millions died. Harsh laws were implemented by Koba, so basically anyone could be found guilty of something. Eating food would most likely have sent you straight to prison, seeing as how the only food there was belonged to the government, so you would be charged with stealing. Millions of people died unfairly due to collectivization and industrialization, and this definitely cannot be compensated by the advantages, which would only be seen in the long run. ...read more.