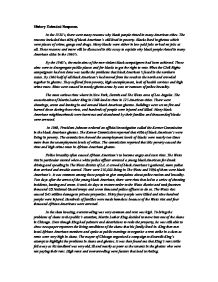 Why African Americans Rioted in the 1960's

History Extended Response. In the 1920's, there were many reasons why black people rioted in many American cities. The reasons included that 40% of black American's still lived in poverty. Blacks lived in ghettos which were places of crime, gangs and drugs. Many blacks were either in low paid jobs or had no jobs at all. These reasons and more will be discussed in this essay to explain why black people rioted in many American cities in the 1960's. By the 1960's, the main aims of the non-violent black campaigners had been achieved. These aims were to desegregate public places and for blacks to get the right to vote. What the Civil Rights campaigners had not done was tackle the problems that black American's faced in the northern states. By 1960 half of all black American's had moved from the south to the north and crowded together in ghettos. They suffered from poverty, high unemployment, lack of health services and high crime rates. ...read more.

Police brutality often caused African American's to become angry and start riots. The Watts riot in particular started when a white police officer arrested a young black American for drunk driving and speeding in The Watts district of LA. A crowd of black American's gathered, more police then arrived and trouble started. There were 250,000 living in The Watts and 98% of them were black American's. It was common among these people to give complaints about police racism and brutality. Two days after the arrest of the young black American, there were riots that led to a series of shooting incidents, looting and arson. It took six days to restore order to the Watts district and took fourteen thousand US National Guard troops and seven thousand police officers to do so. The Watts riot caused $45 million damage to private properties. Thirty four people were killed and nine hundred people were injured. ...read more.

High rents and overcrowding were factors that lead to rioting. In 1966, when Chicago police officers turned off a water hydrant in a ghetto which had been turned on by some young children on a hot day, a riot started. The African American's had little respect for the officers and the mayor had developed an anti-riot force. This meant that when any incident was reported, flying squads of police officers would be sent off to deal with the incident. On this occasion, four thousand police officers were needed to control five thousand rioters. Four hundred black American's were arrested, many injured and two people were killed. In the 1960's, there were many reasons to why African American's rioted. Reasons included the fact that rent was high in ghettos and 40% of blacks were still living in poverty. Blacks started riots because of police brutality and arresting of other black American's. This essay has explained why blacks living in ghettos led to rioting in American cities and who and what influenced them such as the assassination of Martin Luther King. REBECCA DILLON. ...read more.