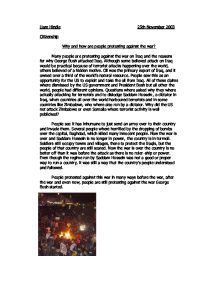 Why and how are people protesting against the war?

Questions where asked why they where actually attacking for terrorists and to dislodge Saddam Hussein, a dictator in Iraq, when countries all over the world harboured terrorists and in some countries like Zimbabwe, who where also run by a dictator. Why did the US not attack Zimbabwe or even Somalia where terrorist activity is well publicised? ...read more.

Now the war is over the country is no better off than it was before the attack as there is no ruler-ship or power. Even though the regime run by Saddam Hussein was not a good or proper way to run a country, it was still a way that the country's people understood and followed. People protested against this war in many ways before the war, after the war and even now, people are still protesting against the war George Bush started. ...read more.