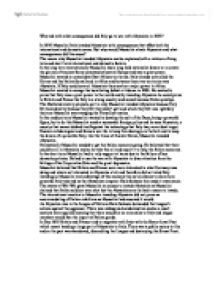 Why and with what consequences did Italy go to war with Abyssinia in 1955?

Why and with what consequences did Italy go to war with Abyssinia in 1955? In 1935 Mussolini Italy invaded Abyssinia with consequences that affect both the international and domestic scene. But why would Mussolini attack Abyssinia and what consequences did this cause? The reason why Mussolini invaded Abyssinia can be explained with a mixture of long term and short term international and domestic factors. In the long term internationally Mussolini had a long held nationalist dream to re-create the glories of Ancient Rome consisted of central Europe and was a great power. Mussolini wanted to consolidate East African territories. Italy already controlled the Eritrea and the Italian Somaliland in Africa and between these two territories was Abyssinia. If Italy could control Abyssinia they can be a major power in Africa. Mussolini wanted to avenge the humiliating defeat at Adowa in 1896. He wanted to prove that Italy was a great power in the world and by invading Abyssinia he could prove to Britain and France the Italy is a strong country and would increase Italian prestige. ...read more.

The events at Wal-Wal gave Mussolini an excuse to invade Abyssinia as Mussolini claimed that Italian soldiers were shot but the Abyssinians so he had a reason to invade. The international reaction to Mussolini invading Abyssinia did not prove as accommodating of Italian ambitions as Mussolini had assumed it would. As Abyssinia was in the League of Nations Haile Selassie demanded the League's actions against the aggressor. There was widespread condemnation and as a result sections were applied meaning that there would be no arms sales to Italy and league members would ban the import of Italian goods. In Dec 1935 Britain and France tried to negotiate with Italy with the Hoare-Laval Pact which meant handing a large part of Abyssinia to Italy. There was a public outcry to this and so the pact was abandoned, discrediting the League and destroying the Stresa Front. Fortunately for Mussolini the sanctions did not include to ban of Oil to Italy and certain countries, Germany, Japan and the USA did not support any of the sanctions. ...read more.

If Italy became engaged in a European conflict, newly conquered Abyssinia would be very difficult if not impossible to defend. The outcome of the war in Italy encouraged the regime to press on with plans to create a truly fascist state that were to dominate government domestic policy through to 1940. The war had been very expensive. It had forced the government into borrowing and had diverted industrial production into armament production. It contributed greatly to the poor state of the Italian economy in the years to 1940. During 1939-40 state expenditure was 60,389 million lire with a deficit of -28,039 million lire. Victory and belief in his own propaganda made Mussolini over-confident in terms of both his own political and military judgement and of Italy's military might. This was made more dangerous by the widespread cult of the infallible Duce and by Mussolini's total isolation from any source of criticism. In particular he developed and exaggerated contempt for Britain and France. Internationally, the League of Nations ended its ineffective boycott of Italy in July 1936. The League's failure to protect one of further undermined its credibility. ...read more.