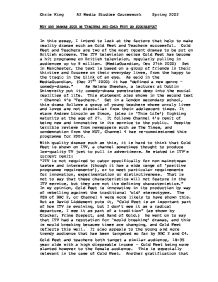 Why are dramas such as Teachers and Cold Feet so successful?

WHY ARE DRAMAS SUCH AS TEACHERS AND COLD FEET SO SUCCESSFUL? In this essay, I intend to look at the factors that help to make reality dramas such as Cold Feet and Teachers successful. Cold Feet and Teachers are two of the most recent dramas to be put on British screens. The ITV television series Cold Feet has become a hit programme on British television, regularly pulling in audiences up to 9 million. (MediaGuardian, Dec 27th 2000) Set in Manchester, the text is based on a group of friends in their thirties and focuses on their everyday lives, from the happy to the tragic in the blink of an eye. As said in the MediaGuardian, (Dec 27th 2000) it has "defined a new genre - comedy-drama." As Helena Sheehan, a lecturer at Dublin University put it; comedy-drama penetrates deep into the social realities of life. This statement also shows in the second text - Channel 4's 'Teachers.' Set in a London secondary school, this drama follows a group of young teachers whose unruly lives and loves are not dissimilar from their adolescent times. It stars Andrew Lincoln as Simon, (also in 'This Life') fighting maturity at the age of 27. It follows Channel 4's remit of being new and innovative in its service to the public. Despite terrible reviews from newspapers such as The Times, and condemnation from the NUT, Channel 4 has re-commissioned this programme for 2002. With quality dramas such as this, it is hard to think that Cold Feet is shown on ITV, a channel sometimes thought to produce low-quality TV just to pull in advertisers. As stated in ITV's current remit: "ITV is not required to cater specifically for non mainstream tastes and interests (though it has a wide range of 'positive programme requirements'), or to meet particular requirements for innovation, experimentation or distinctiveness. That is not to say that these characteristics will not feature in the ITV service, but they are not its defining characteristics." ...read more.

Personal Identity refers to 'finding out who we are, what we're like and how we compare with others. We do this in our interactions with other people of course, but we can use the media to gratify that need as well.' (Mick Underwood, CCMS website.) Personal relationships refers to how the audience forms relationships with people on the TV. "We can find out how other people live; we can identify with people in the media and thus gain a sense of belonging; we can use the media as a source of things to talk to other people about" (Mick Underwood, CCMS website.) Through Cold Feet and Teachers, we do this - identify with the characters, discuss with other people around us, for example, parents and friends, the issues and debates thrown up by the texts. By doing this, we compare ourselves to others, form opinions about characters, and also, if we like the character, we try to copy them, in hair, clothes and even speech sometimes. Unlike Cold Feet, Teachers (in a typical Channel 4 way,) challenges stereotypes. Teachers deals with issues such as cohabitation, sex education, social lives, marital problems, and also teaches the younger audience about lives of the teachers outside school. It shows that teachers actually have problems in their personal lives, and they are not necessarily the angels that they are stereotyped to be. The NUT slated this programme because it was apparently representing the teachers as having 'behaviour worse than the students.' (cited by Glen Owen, Education Correspondent, The Times) But this could also have a positive effect on the teenage audience - seeing teachers in a different light. In fact, David Blunkett, when shown the synopsis, had a very different view from that of the NUT. He said that "we think that the more successful the lead character is in his sex life, then the more young people might be tempted to see some of the many benefits that come from entering the profession." ...read more.

This spreads the phenomena throughout the world, promoting our western ideologies, our norms and values. Less developed countries are slowly losing their cultures because they are bombarded with American culture. CNN news broadcasts to 208 countries over the world via satellite - their viewer numbers reach at least half a billion people. (Mass Media and Communications) Other international satellite systems broadcast a myriad of channels to the world, and this is turning the world into one culture. Due to these trends, you'd expect to see all the American norms and values within the text. To an extent, we do - the clothes, the music and the general attitudes to life. However, in many American texts, there is a happy ending. This is a major difference between the British and the American TV/Film directors. The British match their culture with the music and also TV/Film. The last series of Cold Feet ended with David on a plane home from Australia, in tears because Karen left him. This is obviously a sad ending, and occurs in many other texts - Coronation Street and Eastenders concentrate more on sadness, and American TV shows such as Friends all end with a funny or happy ending. This is perhaps because Britain still wishes to be individual within the ever-consuming American culture. In conclusion, both Cold Feet and Teachers have many similarities and differences. Cold Feet is concerned with class more than Teachers, which puts the teachers on a similar social level to the students. Cold Feet breaks the traditional stereotypes of British culture an people, and Teachers also does this in the different way of reversing roles of teacher/pupil. In both texts, the audience learn about different aspects of life from the texts, and appreciate the opportunity to escape from their own lives for a while. This increases ratings in this country, and abroad as well, spreading the Western culture around the globe. Both Cold Feet and Teachers play an important role in the Media in showing that Britain has many different things to offer than just country houses and the houses of Parliament. ...read more.