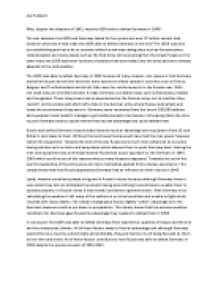 ﻿Joe Hubbard Why, despite the disasters of 1941, was the USSR able to defeat Germany in 1945? The war between the USSR and Germany lasted for four years and over 27 million soviets died, however what was it that made the USSR able to defeat Germany in the end? The USSR was only just establishing and had a lot to consider while the war was taking place such as five year plans, collectivisation and many places such as The Red Army still recovering from the Great Purges on the other hand the USSR had sheer numbers of soldiers that were hailed into the army and were already adapted to the cold weather. ...read more.

Germany never recovered from the loss of 250,000 soldiers and equipment and couldn?t manage to get reinforcements into Russia in time giving them the time to push Germany back to a point where they had the advantage and could defeat them. Russia was behind Germany economically however took an advantage over equipment from US and Britain?s lend lease to them. Without the lend lease Russia would have had the man power however lacked the equipment. Towards the end of the war Russia were much more advanced as a country having vehicles such as tanks and aeroplanes which allowed them to push Germany back. Having the men and equipment was one thing however Russia had a poor approach to the Germans in 1941-1942 which could be one of the reasons why so many disasters happened. ...read more.

With Germany miss-calculating the weather it left many of the soldiers in a critical condition and unable to fight which resulted with many deaths. The climate change gave Russia slightly ?unfair? advantage over the Germans however could be put down to preparation. This clearly shows that the extreme weather conditions for Germany gave Russia the advantage they needed to defeat them in 1945. In conclusion The USSR was able to defeat Germany from experience, quantity of troops and the end and the unexpected climate. All of these factors sway to Russia?s advantage and although Germany was further as a country economically and politically, they just had too much being focused on them at one time and broke. All of these factors contribute to how Russia was able to defeat Germany in 1945 despite the previous events of 1941-1942 ...read more.