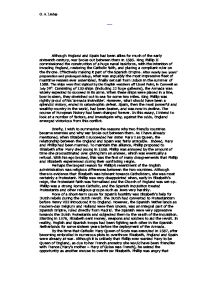 Why, despite their fearsome reputation, did the Spanish Armada fail in their attack on England?

Why, despite their fearsome reputation, did the Spanish Armada fail in their attack on England? Although England and Spain had been allies for much of the early sixteenth century, war broke out between them in 1585. King Phillip II commissioned the construction of a huge naval taskforce, with the intention of invading England, restoring the Catholic faith, and placing a compliant ruler on the throne. Effectively making it part of the Spanish Empire. After nearly two years' preparation and prolonged delays, what was arguably the most impressive fleet of maritime vessels ever assembled, finally set sail from Lisbon in the summer of 1588. The ships were first sighted by the English watchers off Lizard Point, in Cornwall on July 29th. Consisting of 130 ships (including 22 huge galleons), the Armada was widely expected to succeed in its aims. When these ships were placed in a line, bow to stern, they stretched out to sea for some two miles. King Phillip was rightly proud of his 'armada invincible'. However, what should have been a splendid victory, ended in catastrophic defeat. Spain, then the most powerful and wealthy country in the world, had been beaten, and was now in decline. The course of European history had been changed forever. In this essay, I intend to look at a number of factors, and investigate why, against the odds, England emerged victorious from this conflict. ...read more.

"I wish I possessed the talents and strengths necessary to it, But Sir, I have not the health for the sea. I soon become seasick. It would not be right for a person like myself, possessing no experience of seafaring or war to take charge of it" Against his own fears, however, Medina Sidonia proved to be capable and resolute in combat. It is unlikely that there was anything that he could have done to change the outcome of the invasion attempt. The plan was for the Armada to rendezvous with an army from Flanders in the Spanish Netherlands, commanded by the Duke of Parma and consisting of some 30,000 troops. This was to occur at Calais. Unbeknown to Medina Sidonia, however, this army had been decimated by disease and many of the soldiers were dead. The force certainly was not in a fit state to carry out an invasion and was weeks behind schedule. This is significant as it means that even if the rendezvous had taken place, the army would probably have been defeated if it had landed in England and would not have been able to march on London and seize power. This gave added force to the Protestant belief (and propaganda) that the Armada failed by the will of God. Throughout the entirety of the Armada campaign, the weather was consistently in opposition to the Spanish and in favour of the English. ...read more.

When weighed down with loaded cannon and gunpowder, these ships exploded with the violence of a small nuclear explosion, and were capable of decimating an entire navy if they lay at anchor. Indeed, Drake had used this method against the Spanish before 1588. Understandably they were fearful of it. The English ships were unencumbered by transports, and even their smallest vessels were fast and well armed for their size. Although the Spanish ships were undisputedly very large, the largest ship overall 'HMS Triumph' was English. The English cannon/naval gunnery was superior as it had a larger range. This meant that the English could fire on the Spanish before they could fire on them, thus enjoying a major advantage in battle. There is even evidence that the Spanish cannonballs were the incorrect size for the weapons - a terrible blunder considering the importance of the Armada conflict for Spain. In conclusion, it was only due to an unfortunate series events, coupled with superior English tactics that the Armada failed in its aims. The defeat was only narrow and had the Spanish won, then their Empire would have been able to expand unchallenged. We would be speaking Spanish today in England, we would all be Roman Catholics and we would be subservient to a King in Madrid. The whole course of world history would have been changed. The British Empire would never have existed - the English language would probably be dead. Spanish power might still dominate the world today. O. A. Lindop ...read more.