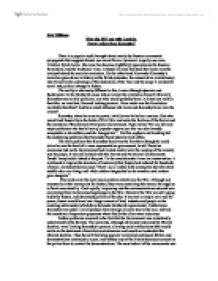 Why did 1917 end with Lenin in Power rather than Kerensky?

Rob Williams Why did 1917 end with Lenin in Power rather than Kerensky? There is a popular myth, brought about mainly by Russian communist propaganda that suggests Russia was saved from a tyrannical reign by one man, Vladimir IIyich Lenin. His name has become (rightfully) synonymous the Russian Revolution, and the traditional view, in Russia at least, had been that Lenin was the catalyst behind the socialist revolution. On the other hand Alexander Kerensky's name has gone down in history as the failed pretender, the conservative revolutionary who failed to take advantage of the abdication of the Tsar and the scope it created for social and political change in Russia. The reality is obviously different to this, Lenin although dynamic and fundamental to the Bolshevik cause did not create the revolution himself. Similarly Kerensky was an able politician, one who would probably have, in times less volatile than this, an excellent, forward-looking premier. How much was the Revolution inevitable therefore? And how much influence did Lenin and Kerensky have over the events? Kerensky, when he came to power, initially was hailed as a saviour. One who would lead Russia from the brink of Civil War and unite the factions of the Soviet and the members of the (former) ...read more.

This was the so called 'Kornilov affair', once General Kornilov had begun to march his division towards St. Petersburg, Kerensky was left with out ' a leg to stand on' , and his only viable alternative to stop a military coup was to turn to the Bolsheviks for there support. In doing so he destroyed the only pillar supporting the derelict Provisional Government, the army. By choosing the Bolsheviks over the national force he almost gave the Bolsheviks carte-blanche to come to power whenever they wished, and although no conflict actually took place it certainly enhanced the cause of Bolsheviks, and put them in prime position to take control over the country. This is obviously a simplification of the facts, many other factors were involved in the downfall of the Provisional Government (such as the Summer Offensive), but to answer my first question, was the Revolution inevitable? This would suggest that it the downfall of the Provisional Government, unless Kerensky had acted remarkably astutely, and had extraordinary luck, was inevitable. What is does not suggest is that the acquisition of power by the Bolsheviks was inevitable, they were certainly were in the 'running' to take power, and the Kornilov affair put them into a good position. ...read more.

This could have, if Kerensky had more power, been fatal for the Bolsheviks and Lenin. Kerensky's major mistake (though it is debatable whether it affected the outcome in the long run) was to launch a summer offensive, the Galician offensive, which badly backfired and lead to the Kornilov affair. In conclusion therefore, on first viewing it would seem that the Bolshevik revolution led by Lenin was inevitable, yet I believe this is a misconception. The Provisional Government was in all essence doomed, yet it was not inevitable that the Bolsheviks would come to power, rather it was the drive and genius (as well as luck) of Lenin that pushed his peers in the Bolshevik party to rebel successfully. Historians will always debate the exact significance of Lenin in the Russian revolution, whether he was the catalyst for revolution or simply took advantage of the situation. For what it is worth I believe that Lenin saw his chance for power, for radical change, and his great conquest was to successful take his chance and secure it for the future, leading Russia from the turmoil it had been in since the beginning of the turn of the century to stability. It was something Kerensky failed to do, and is why Lenin was in power in 1917, and not Kerensky. ...read more.