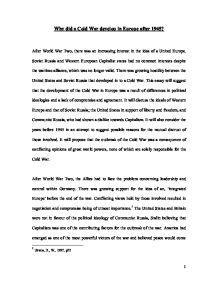 Why did a Cold War develop in Europe after 1945?

Why did a Cold War develop in Europe after 1945? After World War Two, there was an increasing interest in the idea of a United Europe. Soviet Russia and Western European Capitalist states had no common interests despite the wartime alliance, which was no longer valid. There was growing hostility between the United States and Soviet Russia that developed in to a Cold War. This essay will suggest that the development of the Cold War in Europe was a result of differences in political ideologies and a lack of compromise and agreement. It will discuss the ideals of Western Europe and that of Soviet Russia; the United States in support of liberty and freedom, and Communist Russia, who had shown a dislike towards Capitalism. It will also consider the years before 1945 in an attempt to suggest possible reasons for the mutual distrust of those involved. It will propose that the outbreak of the Cold War was a consequence of conflicting opinions of great world powers, none of which are solely responsible for the Cold War. After World War Two, the Allies had to face the problem concerning leadership and control within Germany. ...read more.

In March 1945, however, Roosevelt expressed his fears of Russian aggression when he informed Churchill that he was, 'watching with anxiety and concern the development of the Soviet attitude'.6 Roosevelt believed at the time that Stalin would be better dealt with by a combination of forces such as that of the United Nations Organisation. On 5th March 1946, Winston Churchill, although no longer British Prime Minister, gave a speech, 'The Sinews of Peace'. It illustrated the increasing tension between Britain and the United States, and Soviet Russia after 1945. Accompanied by President Truman, he publicly addressed an audience at Westminster College, Missouri where he argued that although Russia should be 'given her rightful place among the leading nations of the world,' her expansionist actions in the East were raising cause for concern. Churchill claimed, 'the Communist parties...are seeking everywhere to obtain totalitarian control'. Churchill reminded his listeners of the consequences of Hitler and Nazism when he 'cried allowed...but no one paid any attention', prior to the war. Churchill associated 'war and tyranny' with totalitarian governments, namely those in support of Communism and Fascism. ...read more.

By 1947, there was a firm commitment in place to ensure the opposition and prevention of Communist expansion, either internally, or in the form of an external threat.12 Like wise, there was the threat of Capitalism and Democracy in the Soviet spheres. There was ongoing propaganda surrounding the intentions of both the West and Soviet Russia, competition over the control of Europe was to continue, and hostilities intensified. In conclusion, the Cold War emerged from the result of disagreements concerning who would be the supreme power, having control in post-war Europe. The political beliefs of those involved differed greatly and there was no common element between them. Despite the attempts to live in peace with one another, mutual suspicions and mistrust by all those involved, led to increasing hostility. The inabilities to compromise and the violation of terms of agreements, raised tensions within what were already, unfavourable conditions. In addition to this, there were great efforts made by the West and the East to encourage support against opposing view opinions, attempting to expand their own influence. Despite the absence of factual evidence that could prove the intentions of the states, the situation escalated out of control and resulted in the outbreak of a Cold War in Europe. ...read more.