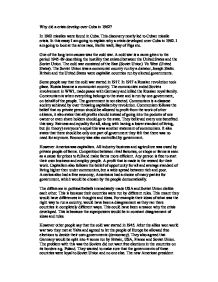 why did a crisis develop over cuba in 1962

Why did a crisis develop over Cuba in 1962? In 1962 missiles were found in Cuba. This discovery nearly led to Cuban missile crisis. In this essay I am going to explain why a crisis developed over Cuba in 1962. I am going to look at the arms race, Berlin wall, Bay of Pigs etc. One of the long term causes was the cold war. A cold war is a name given to the period 1945-89 describing the hostility that existed between the United States and the Soviet Union. The cold war consisted of the East (Soviet Union) Vs West (United States). The Soviet Union was a communist country run by a dictator, Joseph Stalin. Britain and the United States were capitalist countries run by elected governments. Some people say that the cold war started in 1917. In 1917 a Russian revolution took place. Russia became a communist country. The communists ended Soviets involvement in WW1, made peace with Germany and killed the Russian royal family. Communism is when everything belongs to the state and is run by one government, on behalf of the people. The government is not elected. Communism is a classese society achieved by over throwing capitalism by revolution. Communism follows the belief that no private person should be allowed to profit from the work of other citizens, it also states that ...read more.

When they learned that the Soviets had exploded an atomic bomb, the American began to work on far more powerful nuclear weapons. The hydrogen bomb , they exploded the first h-bomb in November 1952. Unknown to the Americans, the Soviets had started to work on their own H-bomb at almost the same time. They exploded their first H-bomb in November 1952. By 1962 the superpowers had enough nuclear bombs to destroy the world four times over. Because they had so many weapons they could place them around the world to threaten their enemies. This is what happens in Cuba in 1962. The arms race made the crisis more likely because both superpowers had nuclear weapons and even H-bombs. This made the crisis more likely because if the superpowers didn't have the nuclear weapons. Soviet Union would have none to put on Cuba and therefore would be no Cuban missile crisis. Between 1948 and 1956 the cold war between the superpowers worsened. 1948 the Soviets blocked Berlin from the rest of Germany, this was a problem as it was meant to be shared with the USA, France and Britain. This confirmed that Soviet Union was prepared to be aggressive towards capitalist countries and also establishes their un-willingness to settle disputes peacefully with the Americans. ...read more.

However America acted very aggressively towards Cuba in their pathetic attempt to over throw Castro which just pushed Cuba to the Soviets. This meant that America was now alone and Cuba and Soviets were to team up against America. As they now both disliked America, This made the crisis more likely to develop over Cuba. In October the American's spotted missiles in Cuba and this sparked the crisis. In my opinion the arms race was the biggest cause. The is because if the superpowers didn't have an arms race they both wouldn't of had nuclear weapon to frighten their enemies. This would mean the Soviet Union wouldn't have any to weapons to put on Cuba and threaten American mainland. In my opinion the Berlin wall was also a cause made the crisis to develop. This is because President Kennedy had promised to support and protect the people of Berlin if the Soviets stepped out of line however Kennedy didn't act until the wall was built. This was when American, Britain and France decided there wasn't going to abandon Berlin and put the Berlin aircraft rescue into action. Kennedy's late, lack of action and weak leadership could be a key reason why the crisis developed. This is because Khrushchev viewed Kennedy as an in-decisive leader giving him the confidence to put missiles on Cuba that threatened the American mainland. ...read more.