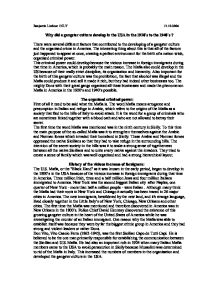 Benjamin Lindner 13ILY 13.10.2004 Why did a gangster culture develop in the USA in the 1920`s to the 1940`s ? There were several different factors that contributed to the developing of a gangster culture and the organised crime in America. The interesting thing about this is that all of the factors just happened to appear at once, creating a perfect environment for the birth of a nation-wide, organised criminal power. This criminal power could develop because the vicious increase in foreign immigrants during that time in America, which is probably the main reason. The Mafia also could develop in the US because of their really strict discipline, its organisation and hierarchy. Also important for the birth of this gangster culture was the prohibition, the fact that alcohol was illegal and the Mafia could produce it and sell it made it rich, but they had indeed other businesses too. The mighty Dons with their great gangs organised all these businesses and made the phenomenon Mafia in America in the 1920's and 1940's possible. The organised criminal power: First of all it need to be said what the Mafia is. The word Mafia means arrogance and presumption in Italian and refuge in Arabic, which refers to the origins of the Mafia as a society that fled to the hills of Italy to avoid attack. It is the word for a group of criminals who are sometimes linked together with a blood oath and who are not allowed to betray their secret. The first time the word Mafia was mentioned was in the ninth century in Sicily. To this time the main purpose of the so-called Mafia was it to strengthen themselves against the Arabic and Norman forces which invaded their homeland in Sicily. These Arabic and Norman forces oppressed the native Sicilians so that they had to take refuge in the surrounding hills. The intention of the secret society in the hills was it to wake a strong sense of togetherness between all the native Sicilians and to unite every native against the invaders. ...read more.

A whole net of organised crime was over the towns were the Mafia was, they controlled the illegal business like bootlegging, extortion, machine gambling, bookmaking, loan sharking, labour racketeering and kidnapping but also legal businesses like food production, they owned restaurants, they controlled the garbage disposal as well as the garment manufacturing, bars and taverns and Labour unions as well. The Don's The Dons "owned" the cities with there businesses, they controlled everything that happened in "their towns" and ran the city in whatever way they felt. They and their gangs had a great part that the Mafia could develop in the US. The strongest and therefore probably the most famous individuals in the history of the American Mafia were Vito Cascio Ferro (Don Vito), Charlie Luciano (Lucky Luciano), Joseph Bonano (Joey Bananas, Alphonse Capone (to his friends: "Snorky," among some members of the press: "Scarface"). These handsome individuals were so powerful and influencing that they had a great part why the Mafia could establish itself in America in the 1920�s to the 1940�s. Vito Cascio Ferro (1862- 1945): Vito Cascio Ferro was responsible for the establishing the communication between the Sicilian and U.S. Mafia. Cascio Ferro came to New York in 1900, he already had established himself in Sicily where he commited kidnapping, extortion, arson, and threatening officials. Ferro�s activities in the U.S. are not clear, but he killed at least one man. This man, called Benedetto Madonia, had been trying to establish a counterfeiting ring in Don Vito's territory without permission or authority of Don Vito. He was killed really brutally,he was cut in pieces and put into a barrel with his penis and testicles in his mouth. This showed how dangerous the Mafia was already in its early stages, as well as that the police could not really stop the uprising criminal society in the U.S. in the 1920�- 1940�s. Don Vito fled to New Orleans before the police could ask him one question ,he spent time organising his own counterfeiting ring along with establishing a connection for heroin smuggling with Sicily. ...read more.

But he could enjoy the new underworld just for about a month. At the end of October in 1931 he was sentenced to 11 years in prison for tax evasion. He already suffered from syphilis and in jail it was getting worse . He managed to leave prison and was never again involved in underworld affairs. He died in 1947 as maybe the greatest Mafia Boss the world has ever seen. His ability to co-ordinate, managing and motivate people made him one of the most powerful Mafia individuals and he had a great deal why the Mafia could establish itself in America. The Mafia in the 1920's - 1940's was so powerful that the Don's and their gangs could do what ever they wanted to do. It is questionable if the individuals of the Mafia were just more powerful and the circumstances too perfect for the growth of the Mafia, or if the Police and the politicians in America were just too weak. What I can say for sure is that throughout history the Mafia was probably the system which was better organised than every government and more powerful than every other gangster culture this world has ever seen because many things that came together by chance which made America a perfect ground for the growth of a gangster culture. One of the most important reasons was the vicious increase in foreign immigrants during that time in America, it flooded some of the most mighty Don's in American history to the USA and gave these Don's the Mob they needed. Another thing was that these Don's were able to keep a really strict discipline, organisation and hierarchy. Also important for the birth of this gangster culture was the prohibition, the fact that alcohol was illegal and the Mafia could produce it and sell it made it rich, but they had indeed other businesses too. The mighty Dons with their great gangs organised all these businesses and made the phenomenon Mafia in America in the 1920's and 1940's possible. ...read more.