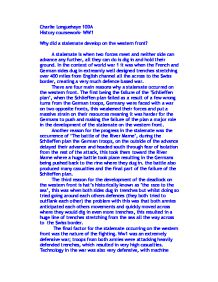 Why did a stalemate develop on the western front?

Charlie Longuehaye 10DA History coursework- WW1 Why did a stalemate develop on the western front? A stalemate is when two forces meet and neither side can advance any further, all they can do is dig in and hold their ground. In the context of world war 1 it was when the French and German sides dug in extreamly well designed trenches stretching over 400 miles from English channel all the across to the Swiss border, creating a very much defence based war. There are four main reasons why a stalemate occurred on the western front. The first being the failure of the 'Schlieffen plan', when the Schlieffen plan failed as a result of a few wrong turns from the ...read more.

on the outside of the advance delayed their advance and headed south through fear of isolation from the rest of the attack, this took them toward the River Marne where a huge battle took place resulting in the Germans being pushed back to the rine where they dug in. the battle also produced many casualties and the final part of the failure of the Schlieffen plan. The third reason for the development of the deadlock on the western front is hat's historically known as 'the race to the sea', this was when both sides dug in trenches but whilst doing so tried going around each others defences (they both tried to outflank each other) ...read more.

Technology in the war was also very defensive, with machine guns, barbed wire and artillery it was difficult for an infantry to advance and capture trenches and then hold it afterward without sustaining very high casualties, planes and tanks were around but still very much in their infancy and were considered unreliable. Overall there is no single definite reason for the event of the stalemate on the western front during ww1, in fact there were many different factors that all played a role in causing the dead lock between forces. No one single reason can be deemed more important than the other since they all relied and depended on each other to affect ww1's infamous western front standstill in 1916. ...read more.