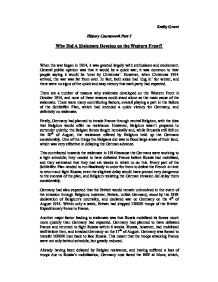 Why Did A Stalemate Develop on the Western Front?

Emily Grant History Coursework Part 2 Why Did A Stalemate Develop on the Western Front? When the war began in 1914, it was greeted largely with enthusiasm and excitement. General public opinion was that it would be a quick war; it was common to hear people saying it would be 'over by Christmas'. However, when Christmas 1914 arrived, the war was far from over. In fact, both sides had 'dug in' for winter, and there were no signs of the quick and easy victory that each party had expected. There are a number of reasons why stalemate developed on the Western Front in October 1914, and none of these reasons could stand alone as the main cause of the stalemate. There were many contributing factors, overall playing a part in the failure of the Schlieffen Plan, which had intended a quick victory for Germany, and definitely no stalemate. Firstly, Germany had planned to invade France through neutral Belgium, with the idea that Belgium would offer no resistance. ...read more.

This meant that Germany was working well behind schedule, which delay had allowed Britain and France time to mobilise, its attack was greatly weakened, and the Schlieffen Plan was beginning to fall apart. France had previously planned a counter-attack, Plan XVII. This had completely failed and France suffered losses of over 200000 men in just 12 days. However, this meant that they regrouped forced more quickly (than if they had continued with Plan XVII) in order to defend Paris, now with the help of the British forces. This was something that the German's hadn't planned for; they had expected to be able to take Paris quickly and without any significant resistance from the French. Now, Germany had been delayed, allowing France more time to prepare; Germany had lost a lot of its troops to fighting Russia, and France also had the assistance of Britain. All of these factors contributed largely to the resulting stalemate at the end of 1914. The issue of German supply lines also affected the attack on France. ...read more.

Germany took Ostend and Antwerp on the 8th of October, but the Allies recaptured Ypres in Belgium on the 18th of October in the first Battle of Ypres, and the other Channel Ports were safe in Allied hands. The race for the sea was over and both sides dug in, in trenches that spanned 470 kilometres. It was a stalemate. Both sides were dug into trenches protected by machine guns, only metres apart in some places. Germany's Schlieffen Plan had failed spectacularly. In conclusion, stalemate had a number of causes; the resistance from Belgium and the involvement of the British, which delayed Germany's attack; the quick mobilisation of the Russian forces and the bad German supply lines which weakened Germany's attack; the French defence of Paris, which diverted Germany's attack; French losses in Plan XVII, without which France may have been strong enough to defeat Germany; and the Battle of the Marne, where both sides failed to defeat the other. The public had been wrong, and the war was not over by Christmas. Both sides had suffered great casualties and loss of forces, and trench warfare had begun. ...read more.