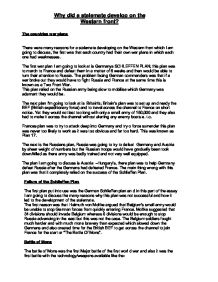 Why did a stalemate develop on the Western Front

The countries war plans There were many reasons for a stalemate developing on the Western front which I am going to discuss, the first was that each country had their own war plans in which each one had weaknesses. The first war plan I am going to look at is Germanys SCHLEFFEN PLAN; this plan was to march to France and defeat them in a matter of 6 weeks and then would be able to turn their attention to Russia. The problem facing German commanders was that if a war broke out they would have to fight Russia and France at the same time this is known as a Two Front War. This plan relied on the Russian army being slow to mobilise which Germany was adamant they would be. The next plan I'm going to look at is Britain's; Britain's plan was to set up and ready the BEF (British expeditionary force) and to travel across the channel to France on short notice. Yet they would not last too long with only a small army of 150,000 and they also had to make it across the channel without alerting any enemy boats e.t.c. ...read more.

Battle of Marne After the battle of Mons the BEF and the French were in retreat and retreated all the way back to the river Marne but the German army also had problems the Russians had mobilised much quicker than expected and already invaded Germany so the German supreme commander Moltke had to pull out 100,000 troops from the army advancing onto France and the British to go back and hold off the Russians yet still this was not all the problems, during the quick advance food or ammunition was not able to keep up so the German troops was forced to leave most of it behind were which left the German soldiers hungry and exhausted. As the German army was still advancing French troops were rushed to Paris by anyhow possible even public taxis were used, The BEF and the French were able to stop the German advance but neither side could make any Major progress by 8th September both sides had to result in digging trenches to protect themselves from snipers and shell fire. The Schlieffen plan had now failed. Up to this point it had been an all moving war but now both sides had taken up more defensive tactics and this was the first sign of the stalemate developing. ...read more.

Conclusion . The main reason I believe why the stalemate developed was because of all the war plans having weaknesses and that no country could make a decisive break through and get the upper hand. There was also many other reasons like: * The equal abilities of the Germans and the British and the French so no-one could tower over the other countries and take charge. * The flat land of northern France which enabled soldiers to be able to see an enemy coming from miles away, making it easier to fire at them from further away. * The new technology like the Enfield rifle and the machine gun. The machine gun was underestimated until it was put into use, this weapon would make it a lot easier to defend your trench if enemy soldiers went "over the top". * And the last and most I think least effective tactic of the first world war was the "over the top" routine this is where soldiers would climb out of there trenches onto no-mans land trying to get into enemy trenches, but most of the soldiers who ever tried this would have been no doubtfully slaughtered going across no-mans land most likely by the enemy machine guns. ?? ?? ?? ?? Why did a stalemate develop on the Western front? ...read more.