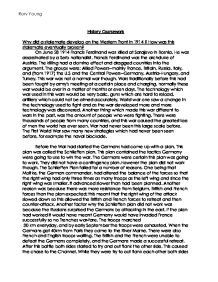 Why did a stalemate develop on the Western Front in 1914 ? How was this stalemate eventually broken?

History Coursework Why did a stalemate develop on the Western Front in 1914 ? How was this stalemate eventually broken? On June 28 1914 Francis Ferdinand was killed at Sarajevo in Bosnia. He was assassinated by a Serb nationalist. Francis Ferdinand was the archduke of Austria. The killing had a domino effect and dragged countries into the argument. The groups were: Allied Powers--mainly France, Britain, Russia, Italy, and (from 1917) the U.S and the Central Powers--Germany, Austria-Hungary, and Turkey. This war was not a normal war though. Wars traditionally before this had been fought by army's meeting at a certain place and charging, normally these war would be over in a matter of months or even days. The technology which was used in this wars would be very basic, guns which are hard to reload, artillery which could not be aimed accurately, World war one saw a change in the technology used to fight and as the war developed more and more technology was discovered. Another thing which made this war different to wars in the past, was the amount of people who were fighting. ...read more.

Both army's had a lot of money and when a gun ws destroyed there was always another waiting to replace it. The same theory applied for the men, when one died there was always another to step in. Once both sides were in the Trenches stalemate set in. One of the reasons was the lack of the super weapon. During WW2 there was the atom bomb, during WW1 there was nothing and this meant that neither side could make significant land, or kill enough enemy or their weapons. Both sides had very similar types of technology and this meant neither side had an advantage on the other. Many of the weapons which were around in 1914 were defensive weapons, which meant they could only be used to defend a position. These were weapons like barbed wire which was extremely hard to get past and was extremely hard to destroy. Artillery could not destroy it and in fact the only way it could be removed was if men went out at night and cut hole's through it for attacks later. Another weapon which made it break throughs hard and not did occur often was the machine gun. ...read more.

The attack was territorial gain but Germany had lost a lot of Soldiers. This meant that Germany was now vunrable to a counter attack. In this attack the Germany had lost many of their storm division, these were Germans key fighters. On May 7, 1915 Lusitania was sunk by a German submarine. This boat was transporting many allied forces but it was also transporting many American civilians. When this boat was sunk it outraged the American people. This put pressure on the president to go to war with Germany. U.S. entered World War I in April 1917. This gave the Allies at great advantage, the man power and the weapons would come in handy. From this moment on the morale of the Germans soldiers started to become very low. America and the allies now started to offer Germany an armistice. Ludendorff was outraged by this and he said if you don't stop negotiations he will leave, to his surprise the Kaiser accepted this and Lundendorff then went and exiled in Sweeden. The Germans liked Lundendorff tactics so this would of lowered their moral. On the 26th of may an outbreak of the Spanish flu affected nearly half a million soldiers. When things normally don't go well there is normally a revolution round the corner, this was true in this case. ...read more.