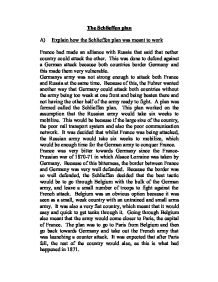 Why did a stalemate develop on the Western Front?

The Schlieffen plan A) Explain how the Schlieffen plan was meant to work France had made an alliance with Russia that said that nether country could attack the other. This was done to defend against a German attack because both countries border Germany and this made them very vulnerable. Germanys army was not strong enough to attack both France and Russia at the same time. Because of this, the Fuhrer wanted another way that Germany could attack both countries without the army being too weak at one front and being beaten there and not having the other half of the army ready to fight. A plan was formed called the Schlieffen plan. This plan worked on the assumption that the Russian army would take six weeks to mobilize. This would be because if the large size of the country, the poor rail transport system and also the poor communication network. It was decided that whilst France was being attacked, the Russian army would take six weeks to mobilize, which would be enough time for the German army to conquer France. France was very bitter towards Germany since the France-Prussian war of 1870-71 in which Alsace Lorraine was taken by Germany. Because of this bitterness, the border between France and Germany was very well defended. ...read more.

By this time, the Schlieffen plan had failed. The German army was split in two, half on the Western Front trying to break through the French and British army in order to conquer French. The other half was on the Eastern Front defending against the supposedly weaker Russian army. The German hope of rushing through Belgium, taking over Paris and then wiping out the French army had become impossible, due to the fact that the German army was half the original force it was, and that the French and British army had forced the German's into a stalemate by using trenches. Once the Schlieffen plan had failed, the German's were forced to use defensive tactics so that they were not forced out of France. The style of trench warfare was new, and because of this, nether side was very experienced with what to do. Therefore, an overall defensive tactic was used, which made breakthroughs very difficult. Breaking through the opposite trench was made more difficult because of the conditions of the trenches. When trying to get through no-man's land, the men were easy targets for the enemy's shell and machine gun fire. The men's ability to fight was further hampered by the barbed wire and the huge shell craters which they had to run through. ...read more.

The blockades were very successful because the German people began to starve and the German soldiers began to become very short-tempered because of the poor conditions of the trenches and the lack of food. Unrest began to rise with both the civilians and the armed forces. The German Generals were forced to do something. They were under extreme pressure to make something happen and make a breakthrough of some kind. To make things worse, the Russian army was also putting the Germans under much more pressure than originally thought it would and many German soldiers were dieing in Stalingrad because of the cold, lack of food and also because the Russian army was just so immense. On March 1918 the German army made one last attempt to defeat the American, British and French combined army. The British tanks, the fresh American troops and weapons and the French army defeated the German army on the Western Front and forced the German's to surrender. To conclude, I would say that the statement is true and that all the factors stated were equally important to the defeat of the breaking of the stalemate on the Western Front. This said however, it is difficult to measure how important these things are. Whilst I consider them equally important, it is difficult to measure them against each other and say weather one is more important than the other. This is why I consider them equally important factors, as they all helped in different ways. ...read more.