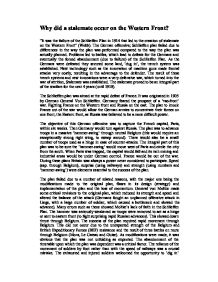 Why did a stalemate occur on the Western Front?

Why did a stalemate occur on the Western Front? "It was the failure of the Schlieffen Plan in 1914 that led to the creation of stalemate on the Western Front" (Webb). The German offensive; Schlieffen plan failed due to differences in the way the plan was performed compared to the way the plan was actually planned. Problems led to battles, which lead to defeats for the Germans and eventually the forced abandonment (due to failure) of the Schlieffen Plan. As the Germans were defeated they secured some land, 'dug in', the trench system was established. New technology such as the innovation of machine guns made frontal attacks very costly, resulting in the advantage to the defender. The result of these trench systems and new innovations were a very defensive war, which turned into the war of attrition, Stalemate was established. The stalemate proved to be an integral part of the warfare for the next 4 years (until 1918). The Schlieffen plan was aimed at the rapid defeat of France. ...read more.

Many errors such as these showed Moltke's lack of faith in the Schlieffen Plan. The hammer was seriously weakened as troops were removed to act as a hinge or sent to eastern front (to fight surprising rapid Russian advances). This slowed down thrust through Belgium. The success of the plan required rapid movement through Belgium. This did not occur due to the unexpected strength of the Belgium and British Expeditionary Forces (BEF) resistance and the result of three battles en route through Belgium (Mons, Le Cateau and Guise). As modifications were made, it was obvious that the plan was not unfolding as expected. The abandonment of the timetable upon which the plan was dependent was a critical factor. The reliance of the movement of soldiers by foot rather than with the speed of railways was a crucial mistake. The exhausted and injured soldiers welcomed the opportunity to 'dig in' which further reinforced the prospect of stalemate. Momentum was also lost as ammunition reserves were dropped, guns showed wear, men were tired, casualties not replaced and the destruction of railways and bridges by the British (essential to quick movement). ...read more.

These trenches also helped soldiers during the bitter winter. The Schlieffen plan and the 'war of movement' was over. Stalemate was established and would not be broken until 1918. The consolidated trench system secured and gave confidence to both armies defensively. Both had strong backing and resting places (esp. German elaborate trenches) and the improvements of new weapons (machine guns), frontal attacks were not often ordered due to strong defence. Neither side was able to break through the defences of the other. A stalemate developed. The Schlieffen plan's aim of rapid defeat of France proved to be unsuccessful and failures due to reasons such as modification to planned attacks, unexpected enemies and lose of momentum. It also proved to be one of the most influential factors determining not only the next four years of war and end to the 'war of movement' (until 1918) but also the eventual outcome of the war. The 'war of movement' ended when Germany was defeated in the Battle of Marne and pushed back to the River Aisne. The trench system was established, symbolising the beginning of trench warfare, and the war of attrition. A stalemate developed between Germany and the allies and lasted until 1918. ...read more.