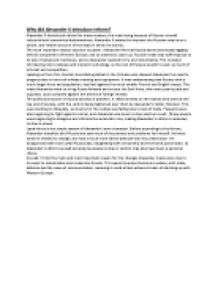 Why did Alexander II introduce reform?

﻿Why did Alexander II introduce reform? Alexander II introduced reform for many reasons, the main being because of Russia?s overall industrial and economical backwardness. Alexander II wanted to improve the Russian empire as a whole, and reform was one of the ways in which he did this. The most important reason was due to power. Alexander felt that Russia was economically lagging behind compared to Western Europe, and so wanted to catch up. Russia?s trade was suffering due to its lack of advanced machinery, and so Alexander wanted to try and industrialise. ...read more.

It was embarrassing that Russia, with a much larger force and population, had lost against the much smaller French and English troops. This made Alexander want to bring Russia forward and ensure the Serf Army, who were poorly paid and supplied, could compete against the armies of foreign threats. The political structure in Russia was also a problem. It relied entirely on the nobles who were at the top end of society, with the control being tightened over them by Alexander?s father, Nicolas I. ...read more.

He knew what he needed to change, and had a much more liberal attitude than his predecessor. He disapproved with how unfair Russia was, disagreeing with censorship and the harsh police state, so Alexander?s reforms as well as being necessary to stay in control may also have been a personal choice. Overall, I think the main and most important reason for the changes Alexander made were due to his want to industrialise and modernise Russia. This would improve Russia as a whole, with trade, defence and the issue of communication, meaning it could at last achieve its aim of catching up with Western Europe. ...read more.