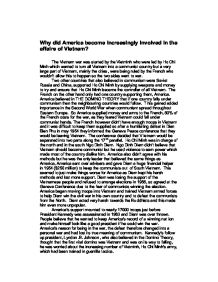 Why did America become increasingly involved in the affairs of Vietnam?

Why did America become increasingly involved in the affairs of Vietnam? The Vietnam war was started by the Vietminh who were led by Ho Chi Minh which wanted to turn all Vietnam into a communist country but a very large part of Vietnam, mainly the cities, were being ruled by the French who wouldn't allow this to happen so the two sides went to war. Two other countries that also believed in communism were Soviet Russia and China, supported Ho Chi Minh by supplying weapons and money to try and ensure that Ho Chi Minh became the controller of all Vietnam. The French on the other hand only had one country supporting them, America. America believed in THE DOMINO THEORY that if one country falls under communism then the neighbouring countries would follow. This gained added importance in the Second World War when communism spread throughout Eastern Europe. So America supplied money and arms to the French, 80% of the French costs for the war, as they feared Vietnam could fall under communist hands. ...read more.

America's reason for being in the war, the defeat therefore changed into a personal war and had lost its true meaning of communism. Kennedy's follow up president, Lyndon .B. Johnson, who also believed in the Domino Theory, thought that the first vital domino was Vietnam and was on its way to falling, he was worried about the increasing number of Vietminh, Ho Chi Minh's army, which had been trained in guerrilla tactics. In 1960 the Vietcong were set-up to over throw Diem but the Vietcong couldn't hope to defeat the might of America by conventional methods of warfare. The Americans had vastly superior weapons and equipment. The Vietcong worked in small groups and were difficult to find and distinguish from South Vietnamese peasants who hate control under Diem. The Vietcong formed a group, the NFL, which to start with were badly equipped but ambushed American soldiers and took their weapons and ammo. The Vietcong built hundreds of miles of underground tunnels, too small for the Americans to fit into. ...read more.

Also as Russia was supporting Ho Chi Minh then it is possible that America didn't want to look as though their greatest rival had defeated them and enemy. Everything Johnson was trying to win the war wasn't working so he set-up OPERATION THUNDER, this was very simple, bombard all know places that Vietcong are hiding. They used very damaging bombs, which destroyed all the surroundings and this was called Carpet Bombing. It would seem that America joined the war for a civilised reason of protecting the civilians of Vietnam and prevent a country turning into communism, but by the end, were fighting for personal reasons. These included: *America had never before lost a war and didn't wish this to become the first *It was a leading country in the world and losing in Vietnam could weaken its reputation *America and Russia both fought to be the greatest country in the weapons and arms industry and losing could show to the world that Russia was stronger as a country It had lost so much and believed it had to fight until a victory was achieved as otherwise it would have been a great loss. ...read more.