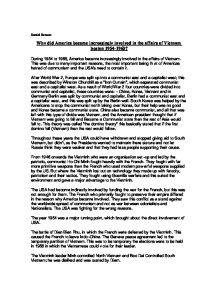 Why did America become increasingly involved in the affairs of Vietnam beaten 1954-1965?

Daniel Benson Why did America become increasingly involved in the affairs of Vietnam beaten 1954-1965? During 1954 to 1965, America became increasingly involved in the affairs of Vietnam. This was due to many important reasons, the most important being that of Americas hatred of communism and the USA's need to contain it. After World War 2, Europe was split up into a communist east and a capitalist west; this was described by Winston Churchill as a "Iron Curtain", which separated communist east and a capitalist west. As a result of World War 2 four countries were divided into communist and capitalist, these countries were: - China, Korea, Vietnam and in Germany Berlin was split by communist and capitalist, Berlin had a communist east and a capitalist west, and this was split up by the Berlin wall. South Korea was helped by the Americans to stop the communist north taking over Korea, but their help was no good and Korea became a communist state. China also became communist, and all that was left with this type of divide was Vietnam, and the American president thought that if Vietnam was going to fall and Become a Communist state then the rest of Asia would fall to. ...read more.

This broke the Geneva peace agreement and the USA supported his actions. This breached the agreement and the agreement was promised to be defended by the Americans. In order to keep peace in South Vietnam in 1959 President Eisenhower poured in economical aid and modern weapons and sent military advisors. In 1961 Eisenhower left the office and by this time 685 advisors were in Vietnam. Eisenhower believed in the 'Domino theory', he thought that if Vietnam fell to Communism the surrounding countries would fall like dominoes around it. This was the main reason USA was involved. Diem set up the A.R.V.N and the new President Kennedy gave approximately $270 million to them. He sent up to 10000 advisors to help Diem. He did this as Communist North seemed to be winning as the peasants in the south disliked Diem as he taxed them and took away there land, where as the Vietminh gave peasants land and helped them. The USA was again fighting for the wrong reasons as they thought it was non-communist against the communists. In fact the peasants didn't understand what communism was they followed Vietminh as they helped them. The US government set up strategic hamlets, which was a costly failure they fortified selected villages, which they thought, could be most easily defended against the Vietminh (Vietcong). ...read more.

The congress passed the 'Tonking resolution', which was take all necessary measures to win. The war effort was in place and the US navy and the South Vietnam navy fought the Vietminh navy. On the 11th of February 1965 President Johnson made it clear that he thought 'Operation Rolling Thunder' would win the war. The plan consisted of bombing North Vietnam key military targets, such army barracks, bridges and cities in an attempt to bomb the Vietminh in to submission and stop communism in Vietnam and hopefully the Middle-East. From 1954 to 1965 the Americans became increasingly involved due to fear, hatred, and the attempt to contain communism. At first America were indirectly part of the war, they gave financial aid and equipment to the South Vietnamese. They increasingly became involved when the prospect of communism endangered their 'Back yard'. The USA was dragged in to the war by their complete and utter hatred of Communism. The US thought the war was communism against nationalists where in fact it was between colonialists and Nationalists. The later part of the war consisted of two Nationalist parties who wanted power over Vietnam. America's tunnel vision saw the Vietminh led by a communist. This meant America would do any thing they could to defeat the Vietminh (communists). And that aim dragged them feet first in to the war they were fighting for the wrong reasons. ...read more.