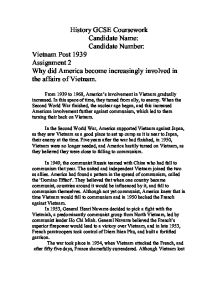 Why did America become increasingly involved in the affairs of Vietnam.

History GCSE Coursework Candidate Name: Candidate Number: Vietnam Post 1939 Assignment 2 Why did America become increasingly involved in the affairs of Vietnam. From 1939 to 1968, America's involvement in Vietnam gradually increased. In this space of time, they turned from ally, to enemy. When the Second World War finished, the nuclear age began, and this increased American involvement further against communism, which led to them turning their back on Vietnam. In the Second World War, America supported Vietnam against Japan, as they saw Vietnam as a good place to set up camp as it is near to Japan, their enemy at the time. Five years after the war had finished, in 1950, Vietnam were no longer needed, and America hastily turned on Vietnam, as they believed they were close to falling to communism. In 1949, the communist Russia teamed with China who had fell to communism that year. The united and independent Vietnam joined the two as allies. America had found a pattern in the spread of communism, called the 'Domino Effect'. ...read more.

This left the north prone to communism. From here it was inevitable America would get involved. On the same day, both North and South Vietnamese representatives met with representatives of France, Great Britain, the Russia, America, China, and the neighbouring states, Laos and Cambodia, in Geneva, to discuss the future of Indo-China. At this conference, it was agreed to divide Vietnam along the 17th parallel. This meant giving the north to the communists, and the south to the Saigon government. On October 24th 1954, the American president, Dwight Eisenhower, backed South Vietnam against the north, in an attempt to shut out the communism. In 1955, South Vietnam was made a republic, with anti communist leader Ngo Dihn Diem, as president. Ngo Dihn Diem's appointment was seen by many as a fix. After this and with John F. Kennedy taking over as American president in 1961, America continued their support to the south, with the treaty of amity and economic relations. This increased American involvement as they were supplying army aid to the south. ...read more.

In 1968, America stepped up their interest further. 'Operation Phoenix', by the CIA (Central Intelligence Agency), stated that America had to arrest at least 3,000 Viet Cong a month. In the same year, the 'Tet Offensive' was launched by the North Vietnamese General Vo Nguyen Giap. It was a series of attacks on American targets. In this attack, The Viet Cong loose 85,000 troops but it is seen to the world as a home win. That same year, America conducted 'My Lai', a search and destroy scheme, kept low key by America. In all of the information I have reviewed, the bottom line of the question 'Why did America become increasingly involved in the affairs of Vietnam', is that they were trying to impede a communist revolution talking place in Vietnam. America had previously tried to bully countries into being anti communist (Russia, China) and were doing it again. 1963 was a key year in the war, as Kennedy is assassinated and LBJ takes over. I believe that if Kennedy would have stayed in charge, American involvement would have been minimal, as I don't believe he would have capitalised on the 'blank cheque' as LBJ did. ...read more.