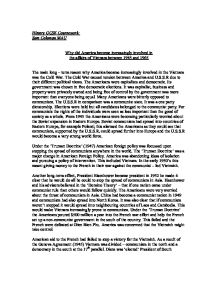 History GCSE Coursework: Sam Coleman MAU Why did America become increasingly involved in the affairs of Vietnam between 1945 and 1965 The main long - term reason why America became increasingly involved in the Vietnam was the Cold War. The Cold War caused tension between America and U.S.S.R due to their different political views. The Americans were capitalists and democratic. Its government was chosen in free democratic elections. It was capitalist, business and property were privately owned and being free of control by the government was more important than everyone being equal. Many Americans were bitterly opposed to communism. The U.S.S.R in comparison was a communist state. It was a one party dictatorship. Elections were held but all candidates belonged to the communist party. For communists the rights of the individuals were seen as less important than the good of society as a whole. From 1945 the Americans were becoming particularly worried about the Soviet expansion in Eastern Europe. Soviet communism had spread into countries of Eastern Europe, for example Poland; this alarmed the Americans as they could see that communism, supported by the U.S.S.R, could spread further into Europe and the U.S.S.R would become a very strong world force. Under the 'Truman Doctrine' (1947) American foreign policy was focussed upon stopping the spread of communism anywhere in the world. ...read more.

Diem was also corrupt. Instead of giving important government jobs to the best people, he gave them to members of his own family. They then used these jobs to make money. Diem's growing unpopularity led North Vietnam into creating a new guerrilla force. This was called the Vietcong and they're main aim was to get rid of Diem. This army of South Vietnamese opponents of Diem used terror to undermine his government. When President Kennedy became President in 1961 he made it clear that he too would fight the spread of communism. But within months Kennedy seemed to be a 'soft' President. First he bungled the 'Bay of Pigs' invasion of Cuba. Then he stood back as the Soviet Union built the Berlin Wall. Kennedy now had to appear though to show the American people that he was strong opposed to communism and not an appeaser. He saw that the Vietcong was gaining a great deal of support and was keen to increase American involvement in South Vietnam but he wouldn't send United States combat troops there. He agreed to increase the number of military experts training the South Vietnamese Army, the Army of the Republic of Vietnam (ARVN). These 'advisors' increased from 700 to 3000. By 1963 there were 15,000 of them. He also agreed to give more military equipment to the South Vietnamese Army. ...read more.

One-month later 3500 United States Combat troops arrived in Vietnam to protect the air bases used to bomb North Vietnam. One year later there were over 200,000. America's war had begun. The major long-term cause of America's increasing involvement was the Cold War. This led to the 'Truman Doctrine' which was the launch - pad for American involvement. There was a number of short - term effects but the major two were the growth of the Vietcong and Johnson's fears of being seen as an appeaser. The Americans had become under great pressure due to the growth of the Vietcong and was worried that it would only be a matter of time before the South of Vietnam fell to the communist-led North. Something had to be done and during this time pressure on the American president Kennedy had become extortionate if nothing was done then this would lead him into being seen as an appeaser. The Vietcong had become so strong due to the use of Guerrilla tactics, which was terrifyingly effective. When President Johnson came into power in 1964, he was afraid at being seen as an appeaser. This led him to become under great pressure to increase America involvement, if he didn't he would be seen as an appeaser. This perhaps rushed Johnson into sending troops into Vietnam after the Gulf of Tonkin incident. We know this because the ships that were accused of attacking the American Gunboats were actually assisting a South Vietnamese attack on North Vietnam. ...read more.