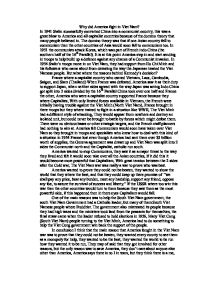 Why did America fight in Vietnam?

Why did America fight in Viet Nam? In 1941 Stalin successfully converted China into a communist country, this was a great blow to America and all capitalist countries because of the domino theory that many people believed in. The domino theory was that if one Asian country fell to communism then the other countries of Asia would soon fall to communism too. In 1951 the communists attack Korea, which was part of French indo China (the southern half of the 16th Parallel). It is at this point America step in and start sending in troops to help build up a defence against any chance of a Communist invasion. In 1954 Stalin's troops move in on Viet Nam, they had support from Ho Chi Minh and his followers who came about from detesting the way the Japanese treated the Viet Namese people. But what where the reasons behind Kennedy's decision? France where a capitalist country who owned Vietnam, Laos, Cambodia, Saigon, and Siam (Thailand) ...read more.

America wanted to stop Communism, they saw it as a major threat to the way they lived and felt it would soon take over all the Asian countries, if it did this it would become more powerful that Capitalism, With great tension between the 2 sides after the Cold war, The Viet Nam war was really a war to prove who was best. America wanted to prove they could not be beaten, they wanted to show the world that they where the best, and that they could keep up there promise of "we shall pay any price, bear any burden, meet any hardship, support any friend, oppose any foe, to assure the survival of success and liberty." If the USSR where too win this war then the other countries would turn to them because they saw them as the most powerful side, if this happened then in there eyes Capitalism would fall. One of the main reasons was to help the South Viet Nam government, the south Viet Nam Government had a Catholic leader, but many of them South Viet Namese people where Buddhist. ...read more.

They wanted to seem trust worthy, secure, safe, friendly, and the only alternative, they wanted to be a good guy for all the countries who needed there help, so what is 2.5 millon people died in the Viet Nam war, at least America is still safe, the war was not fought 9000 miles away from America for nothing, it was so America wouldn't have to clean up after themselves, they had everyone right where they wanted, they could bomb Viet Nam when they wanted with what they wanted because they had the power, they were in control, when America began to loose that control they pull out and say " it is there war, they are the ones who have to win or lose it." And "it is the people of Viet Nam against the communists." If they truly agreed with what they where saying then they never should of got involved, but they did because they wanted to be in control. ...read more.