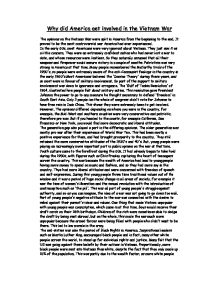 Why did America get involved in the Vietnam War

Why did America get involved in the Vietnam War The opinions on the Vietnam War were split in America from the beginning to the end. It proved to be the most controversial war America had ever experienced. In the early 60s, most Americans were very ignorant about Vietnam. They just saw it as a little concern. They were an extremely confident nation who had never lost a war to date, and whose resources were limitless. So they naturally assumed that all their weapons and firepower would ensure victory in a couple of months. Patriotism was very strong in America at that time. Many people remembered the McCarthy trials of the 1950's, so people were extremely aware of the anti-Communist feelings in the country in the early 1960's.Most Americans believed the 'Domino Theory' during these years, and so most were in favour of military involvement. So part of the support to military involvement was down to ignorance and arrogance. The 'Gulf of Tonkin Resolution' of 1964, illustrated how people felt about military action. ...read more.

This was all part of young people's struggle against authority, and so as you can imagine, the idea of a war was not going to go down too well. Part of young people's negative attitude to the war was connected with the desire to rebel against their parent's ideas and values. One thing that made Vietnam unpopular with young people was conscription, which came in at this time. Boys would receive their draft cards on their 18th birthdays. Children of the rich were sometimes able to dodge the draft by being sent abroad, but on the whole, this made the war much more unpopular because the armed forces were being filled with people who didn't want to be there. This led to low morale in the army. The mid-sixties was also the period of Black Rights in America. Inspirational leaders such as Martin Luther King, encouraged black people and in fact, many other white people across the world, to stand up for individual rights and justice. Many felt that the US was going against these beliefs by their actions in Vietnam. ...read more.

They saw the use of Nepalm, Agent Orange, the devastation of the intensified bombing, night after night, and it ground on them. In 1969, the media brought the My Lai Massacre to the public's attention. This shocked the world, and created yet more opposition to the war. America began to realise their unpopularity throughout the world. Also, by the late 60s, the 'Hippies' were becoming more widespread. With their pacifist attitudes, (for example 'Make Love, Not War'), they held more and more protests against Vietnam, for example outside of the American Embassy. Not only that, Vietnam was so expensive that it was sending the Us economy into recession, and people were having to pay higher taxes in order to fund it. Prosperity was in danger, which caused resentment for the war. In 1971, an opinion poll was done in America on whether the public thought that Vietnam was morally wrong. Sixty percent answered yes, but still forty percent said no. So there was still a large core of the population that believed in the Vietnam War. Therefore, in conclusion, although there was a dramatic shift in opinion, and much opposition to it supported by leading figures in government and pop culture, much of America supported the war effort. ...read more.