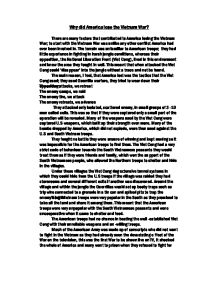 Why did America lose the Vietnam War? There are many factors that contributed to America losing the Vietnam War; to start with the Vietnam War was unlike any other conflict America had ever been involved in. The terrain was unfamiliar to American troops; they had little experience in fighting in harsh jungle conditions, whereas their opposition, the National Liberation Front (Viet Cong), lived in this environment and knew the area they fought in well. This meant that when attacked the Viet Cong could 'disappear' into the jungle without a trace and not be found. The main reason, I feel, that America lost was the tactics that the Viet Cong used; they used Guerrilla warfare, they tried to wear down their opposition; The enemy attacks, ...read more.

Many of the bombs dropped by America, which did not explode, were then used against the U.S and South Vietnam troops. They fought no battle they were unsure of winning and kept moving so it was impossible for the American troops to find them. The Viet Cong had a very strict code of behaviour towards the South Vietnamese peasants they would treat them as if they were friends and family, which won the support of the South Vietnamese people, who allowed the Northern troops to shelter and hide in the villages. Under these villages the Viet Cong dug extensive tunnel systems in which they could hide from the U.S troops if the village was raided they had storerooms and several different exits if another was discovered. ...read more.

The American troops had no chance in beating the well-established Viet Cong with their unreliable weapons and un-willing troops. Much of the American Army was made up of conscripts who did not want to fight in the Vietnam as they had already seen the devastating effect of the War on the television, this was the first War to be shown live on TV, it shocked the whole of America and many went to prison when they refused to fight for their country. The troops fighting in the Vietnam did not want to be there so did not go into battle determined to win. There were many protests about the War and final after the failed attempts at peace talks Richard Nixon pulled all American troops out of the Vietnam War in 1973. ...read more.