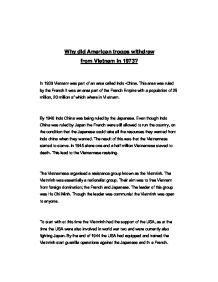 Why did American troops withdraw from Vietnam in 1973?

Why did American troops withdraw from Vietnam in 1973? In 1939 Vietnam was part of an area called Indo-China. This area was ruled by the French It was an area part of the French Empire with a population of 25 million, 20 million of which where in Vietnam. By 1940 Indo China was being ruled by the Japanese. Even though Indo China was ruled by Japan the French were still allowed to run the country, on the condition that the Japanese could take all the resources they wanted from indo china when they wanted. The result of this was that the Vietnamese started to starve. In 1945 alone one and a half million Vietnamese staved to death. This lead to the Vietnamese resisting. The Vietnamese organised a resistance group known as the Vietminh. The Vietminh was essentially a nationalist group. Their aim was to free Vietnam from foreign domination; the French and Japanese. The leader of this group was Ho Chi Minh. Though the leader was communist the Vietminh was open to anyone. To start with at this time the Vietminh had the support of the USA, as at the time the USA were also involved in world war two and were currently also fighting Japan. By the end of 1944 the USA had equipped and trained the Vietminh start guerrilla operations against the Japanese and the French. In 1945 America launched two atom bombs on Hiroshima in Japan and as a result of this Japan was forced to withdraw its armies from south east Asia including Vietnam and surrender. In December 1945 ho chi minh took over running Vietnam but also in December 1945 the French returned to Vietnam and the French and Vietnamese began a war for control. ...read more.

The aim of most America troops was to stay alive and get home. The Vietcong were fighting for their freedom their homes their families their land and their lives, plus they had the experience of fighting from fighting the French in the year before. The Vietcong had reason to fight and believed in that reason, the American's didn't. Around 2.8 million American soldiers served in Vietnam 2 million of these were drafter or conscripted. The average age of an us soldier was 19 and most of the army was made up of blacks, Hispanics and poor whites. From the start the army wasn't the best it could be. As well as the bad make up of the army, each soldier was on his tour of duty. The tour of duty system was where conscripted or drafted us soldiers were under obligation to serve one year in Vietnam. This was a big part of the military failure as each soldier was just simply aiming to reach the end of their tour of duty, they weren't interested in fighting, only in making it through the 12 months and getting home. Only 6% of deaths took place among soldiers in their last 3 months of service. This was bad for the army, as platoons never had the actual full support of the platoon. As well as the lack of support, the replacement soldiers that came after the soldiers finishing their tour of duty were inexperienced. Just as soldiers got used to Vietnam and had gained some experience their tour was up and they left. The US army was never fully trained. Drug abuse was a major problem within the troops too, lessening their abilities even more. ...read more.

Next, peace talks were held in 1969 where Nixon tried to get the North Vietnamese to withdraw its troops from South Vietnam. Obviously the north didn't want to agree to this as they were winning the war and had no reason to. Eventually though Nixon forced the North Vietnamese to accept a peace agreement and withdraw their troops with a different tactic. This tactic included improving American relations with Russia and china while at the same time continuously bombing the North Vietnam. The bombing did eventually pay off and secret peace talks started to be held. By December 1972 though Nixon was becoming impatient and ordered the mass bombing of 2 places in North Vietnam, Hanoi and Haipong. In 1 days 200 000 bombs were dropped. This showed the North Vietnamese that America weren't about to give in or back down. More negotiations then took place and on the 23rd of January 1973 an agreement was reached. The America troops would withdraw from North Vietnam, but the 2 sides, north and south would stay separate. Nixon becoming president was the start of the end of the war in Vietnam, and why the troops actually did withdraw in 1973. If it wasn't for the media the protesters and Diem, Nixon wouldn't have been elected. Nixon wasn't really the reason for the withdrawal of the troops, all these things before led to him having to withdraw them to end the war. In my opinion Diem was the main cause as to why the troops in 1973 from America had to withdraw from Vietnam. If when Diem was elected he had done a better job and got the South Vietnamese support then there may not have been a war to start with. ...read more.