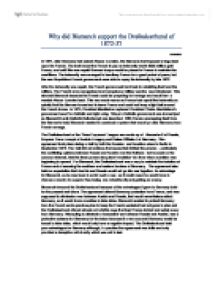 Why did Bismarck support the Dreikaiserbund of 1872-3?

Why did Bismarck support the Dreikaiserbund of 1872-3? 12 MARKS In 1871, after Germany had seized Alsace-Lorraine, the Germans had imposed a large task upon the French. The task forced the French to pay an indemnity worth 5000 million gold Francs, and until this was repaid German troops would be placed in France to maintain the conditions. The indemnity was arranged to handicap France for a good period of years, but the new Republican French government were able to repay the indemnity by late 1872. After the indemnity was repaid, the French government took task to rebuilding itself and the military. ...read more.

With France unwrapping itself from the German's hold, Bismarck needed to construct a system that would protect Germany from French revenge. The Dreikaiserbund or the Three Emperors' League was made up of Alexander II of Russia, Emperor Franz Joseph of Austria-Hungary and Kaiser Wilhelm I of Germany. This agreement took place during a visit by both the Russian and Austrian rulers to Berlin in September 1872. The visit did not address the issues that divided the powers - particularly the conflicting opinions between Russia and Austria over the Balkans but focused on the common interest, that the three powers despised 'revolution' at a time when socialism was beginning to spread. ...read more.

The agreement offered Germany protection from France, and was supposed to eliminate a war between Austria and Russia, that would nevertheless affect Germany, as it would force countries to take sides. Bismarck needed to protect Germany from the French as his previous plan to keep the French secluded had not gone to plan and the Dreikaiserbund offered almost an invisible cage that kept France locked and safely away from Germany. Attempting to eliminate a forecasted war between Russia and Austria, was a protective scheme for Germany for the future because if a war occurred Germany would be forced to take sides, which would only have a negative impact. The Dreikaiserbund held pure advantages for Germany although, in practice the agreement was futile and only provided a deceptive veil of unity which was not to last. ...read more.