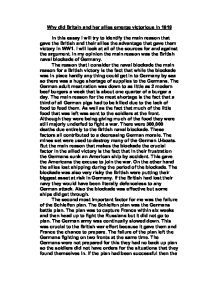 Why did Britain and her allies emerge victorious in 1918.

Why did Britain and her allies emerge victorious in 1918 In this essay I will try to identify the main reason that gave the British and their allies the advantage that gave them victory in WW1. I will look at all of the sources for and against the argument. In my opinion the main reason was the British naval blockade of Germany. The reason that I consider the naval blockade the main reason for a British victory is the fact that while the blockade was in place hardly any thing could get in to Germany by sea so there was a huge shortage of supplies to the Germans. The German adult meat ration was down to as little as 2 modern beef burgers a week that is about one quarter of a burger a day. The main reason for the meat shortage is the fact that a third of all German pigs had to be killed due to the lack of food to feed them. ...read more.

If the plan had been successful then the French would have been knocked out of the war putting Britain in a very bad position with the Germans not having the French to worry about. The failure also put the war into a stalemate that the Germans eventually lost. There were things that pointed to the failure of the Schliefen plan not being a crucial factor in allied victory, such as the fact that the failure of the plan did not actually defeat the Germans just held them up and that it can't have been crucial if it happened four years before the end of the war. I am going to put the British leaders and tactics as my third most important reason for victory. This is quite controversial as many criticised the British leaders like Douglas Haig after battles like the Somme and Gallipoli. But I am putting it in third because you can't win the war if you have very poor tactics and leadership. Our leaders used the tactic of attrition to good effect in defeating the Germans. ...read more.

They were used well at Cambria, almost too well as the infantry could not keep up with them and they had to retreat. In the Somme the tanks broke through enemy lines. Other British inventions were the long-range aircraft that had been developed by the later stages of the war. The British weapons and artillery and other weapons had been developed so that they are a lot more accurate and powerful. But on the other hand in many battles the tanks did not work or were too slow. The Germans also quickly invented ways of stopping the tanks, they had poor weapons and no battles were won entirely by the tanks. In conclusion the main reason that Britain and her allies emerged victorious in 1918 was the naval blockade, as it left the German soldiers underfed and therefore not in the best shape for fighting a war. It also gave the Americans an excuse to join the war. The blockade was not the only factor to Allied victory but in my opinion it is the most crucial one. ...read more.