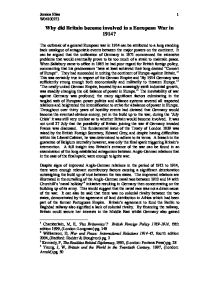 Why did Britain become involved in a European War in 1914?

Why did Britain become involved in a European War in 1914? The outbreak of a general European war in 1914 can be attributed to a long standing back catalogue of antagonistic events between the major powers on the continent. It can be argued that the unification of Germany in 1871 commenced the extensive problems that would eventually prove to be too much of a strain to maintain peace. When Salisbury came to office in 1885 he had poor regard for British foreign policy, commenting that his predecessors 'have at least achieved their long desired "Concert of Europe". They had succeeded in uniting the continent of Europe-against Britain.'1 This was certainly true in respect of the German Empire and 'By 1914 Germany was sufficiently strong enough both economically and militarily to threaten Europe.'2 'The newly united German Empire, boosted by an amazingly swift industrial growth, was steadily changing the old balance of power in Europe.'3 The inevitability of war against Germany was profound; the many significant factors culminating in the tangled web of European power politics and alliance systems severed all respected relations and heightened the intensification to strive for a balance of power in Europe. Throughout over thirty years of hostility events had dictated that Germany would become the eventual obvious enemy, yet in the build up to the war, during the 'July Crisis' it was still very unclear as to whether Britain would become involved. It was not until 27 July that the possibility of Britain joining the war if Germany invaded France was discussed. The fundamental issue of the Treaty of London 1839 was raised by the British Foreign Secretary, Edward Grey, and despite having difficulties within his Liberal Cabinet, he was determined to adhere to its terms. ...read more.

It can therefore be seen that the Entente Cordiale was not a deliberate direct attack against Germany, although, despite these ulterior motives, Germany still opposed the Entente and in protest, initiated the first Moroccan Crisis in 1905 which further worsened Anglo-German relations whiles strengthening the Anglo-French Entente. In protest to the agreement of French predominance in Morocco, the Kaiser went to Tangier and publicly advocated the importance of the independence of the Sultan and how Germany was prepared to defend both her own interests and Moroccan interests in the event of a French take over or assault. The Kaiser also demanded a conference be held to finally sort out the status of Morocco, thus completely undermining the status of the Entente Cordiale. This took place the following year in Algeciras in Spain. The conference was significant because it exposed Germany's isolation in Europe. All countries, with the exception of Austria-Hungary, supported France, and even the U.S.A and Italy who were supposed to be a member of the Triple Alliance, had supported French claims in Morocco. For Germany the conference had had an adverse effect, instead of testing a weak, non-military Entente, with the intensions of splitting it up, it had encouraged military conversations to take place between Britain and France. Although still, no military plans were cemented, the ideas were in the background, and this together with heightened isolation provoked Germany to make a distinct change in her foreign policy. Without the support of Austria-Hungary, as the Algeciras Conference had confirmed, Germany would be completely isolated. She therefore turned her foreign policy to concentrate on the maintenance of Austria as a significant power. She aimed to prevent the Austro-Hungarian Empire from crumbling and to strengthen the bond between the two countries, for she could not afford to lose Austria-Hungary as an ally as she had done with Italy. ...read more.

the Government need a distraction from this and other domestic problems such as industrial strife and the militant campaign being pursued by the Suffragettes, but they were also concerned that a war in which they were not involved would result in a massive growth in either German or Russian power, both of which would lead to the erosion of Britain's position of pre-eminence in the world. Previously European rivalries in both India and china had occurred because of the collapse of existing power. Britain viewed the collapse of Ottoman rule in the Balkans and the related threat of Slavic nationalism as direct competition to the balance of power. To say that Britain's involvement in a general European war was inevitable would be unjust. As we have seen, despite the strains caused from the collection of previous events, there were efforts and signs of improved Anglo-German relations in the final period leading up to the war. The build up of events commencing with the refusal by Britain of Germany's Continental League in 1898 would have certainly carved a well established rift between the two states, however, in retrospect, it is clear that it was not only a combination of the long standing poor relations with Germany that attracted Britain to war, but the final decision to enter was also highly dependent on domestic factors. It can therefore be said that both long term international relations and short term domestic issues contributed significantly to Britain's entrance into the First World War; if domestic circumstances had have been different then perhaps this would have had some bearing on the eventuality of war for Britain. As it stood, the anti-German feeling that had been smouldering for years were finally surfaced and the war was to be fought and over by Christmas. ...read more.