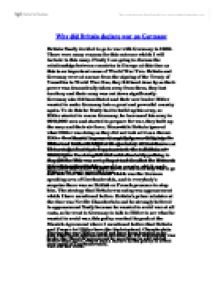 Why did Britain declare war on Germany

Why did Britain declare war on Germany Britain finally decided to go to war with Germany in 1939. There were many reasons for this outcome which I will include in this essay. Firstly I am going to discuss the relationships between countries in Europe at this time as this is an important cause of World War Two. Britain and Germany were at unease from the signing of the Treaty of Versailles in World War One, they felt hard done by as their power was dramatically taken away from them, they lost territory and their army was cut down significantly. Germany also felt humiliated and their new leader Hitler wanted to make Germany into a great and powerful country again. ...read more.

Hitler then went forward again and took over Austria in the Anschluss of 1938; again France and Britain did absolutely nothing to stop Hitler. This was a very important invasion for Hitler as this was mostly a German speaking country which made Hitler a far more powerful man. Still after this Hitler wanted more, so his next step was to go and take over the Sudetenland which was the German speaking area of Czechoslovakia, and to everybody's surprise there was no British or French presence to stop him. The strategy that Britain was using was appeasement which I have mentioned before. Britain's prime minister at the time was Neville Chamberlain and he strongly believed in appeasement firstly because he wanted to avoid war at all costs, so ...read more.

Britain then also realised that it was time to start to rearm Britain as war looked a likely outcome. Then in Russia Stalin was getting worried about Hitler so even though they both hated each other after World War One they joined together forming the Nazi soviet pact. Hitler signed the pact because they didn't want to worry about the Russian forces when attacking Poland and Stalin signed it for breathing space so they would have time to build up there army. Hitler demanded Poland but was refused. Then Hitler invaded Poland. Britain and France then had no option but to declare war on Germany so declaration of war was on the 3rd September 1939. Even though he wasn't allowed Hitler built his country from scratch. The British were foolish to pursue appeasement which in the end turned out as a World War By Owen Hanna ...read more.