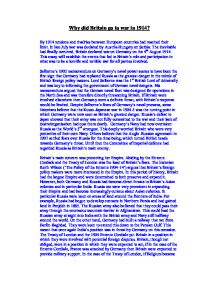 Why did Britain go to war in 1914? By 1914 tensions and rivalries between European countries had reached their limit. In late July war was declared by Austria-Hungary on Serbia. The inevitable had finally occurred. Britain declared war on Germany on the 4th August 1914. This essay will establish the events that led to Britain's role and participation in what was to be a horrific and terrible war for all parties involved. Selborne's 1902 memorandum on Germany's naval power seems to have been the first sign that Germany had replaced Russia as the greatest danger in the minds of British foreign policy makers. Lord Selborne was the 1st British Lord of Admiralty and was key to informing the government of German naval dangers. His memorandum argued that the German naval fleet was designed for operations in the North Sea and was therefore directly threatening Britain. If Britain were involved elsewhere then Germany were a definite threat, with Britain's response would be limited. Despite Selborne's fears of Germany's naval prowess, some historians believe that the Russo-Japanese war in 1904-5 was the turning point in which Germany were now seen as Britain's greatest danger. ...read more.

They were keen to extend this down to the Persian Gulf. This meant that once again India's position was in threat by Germany on this occasion. The Treaty of London and the 1904 Entente Cordiale put Britain in a position in which they were involved with potential foreign disputes. Britain, though not obliged, were in a position in which they were expected to act, if in the case of the Entente Cordiale, France was attacked by Germany then Britain were expected to provide military support. In the case of the Treaty of London, if Belgium became non-neutral then some action would have to be taken, though not necessarily by Britain. Protecting Belgium and France from Germany were very important for Britain because they both were pathways for German troops to position themselves in an area that could threaten Britain and actually carry out the threat. The Northern French dockyards were especially significant for both Britain and France as Germany could set up their naval base directly in line with Britain. ...read more.

There were several reasons behind the British governments decision to declare war on Germany on the 4th August 1914. I believe that the Entente Cordiale and Britain's keenness to remain allies with France was the most important reason for Britain going to war in 1914. Had they not had an agreement and an understanding with France, then Britain were potentially vulnerable from a German or even a Russian attack. This could even mean an attack on Britain's Empire and especially India. Shorter-term reasons for going to war such as the 1904 Entente Cordiale with France and Britain's fear of Germany's increasing Naval strength provide us with an insight to the responsibility of the British government towards German actions and its obligation to France. Longer-term reasons such as keeping Belgium neutral (the Treaty of London) were still essential in protecting Britain's front but maybe less important than the short-term reasons (that have been explained above). Overall, Britain stuck to its guns and kept to their responsibilities in defending France and keeping Belgium interest, which is why I believe that Britain were committed to war and were right to fight against Germany. ...read more.