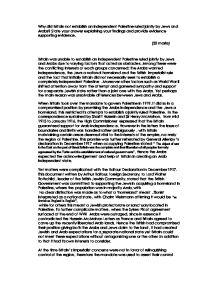 Why did Britain not establish an independent Palestine ruled jointly by Jews and Arabs? State your answer explaining your findings and provide evidence supporting evidence. (30 marks) Britain was unable to establish an independent Palestine ruled jointly by Jews and Arabs due to varying factors that acted as obstacles. Among these were the conflicting interests of each groups concerned: the Arabs wanted independence, the Jews a national homeland and the British imperialist rule and the fact that initially Britain did not necessarily seek to establish a completely independent Palestine . Moreover other factors such as World War II shifted attention away from the attempt and garnered sympathy and support for a separate Jewish state rather than a joint one with the Arabs. Yet perhaps the main reason was unsolvable differences between Jews and Arabs. When Britain took over the mandate to govern Palestine in 1919, it did so in a compromised position by promising the Arabs independence and the Jews a homeland, this restricted its attempts to establish a jointly ruled Palestine. In the correspondence sustained by Shariff Hussein and Sir Henry McMahon, from mid 1915 to January 1916, the High Commissioner expressed that the Britain guaranteed support for Arab independence. However in the letters the issue of boundaries and limits was handled rather ambiguously , with Britain maintaining certain areas deemed vital to the interests of the empire, namely the region of Palestine. ...read more.

This and a growing sense of Palestinian nationalism meant that the Arab population was reluctant to share an independent state with Jews, when they felt the land as rightfully theirs, this meant they stubbornly refused to share it in any form. Perhaps the greatest obstacle for a joint Arab and Jew state was the hostility existent between both. Arabs were angered by an increase in Jewish immigration brought on by the 3rd aliyah between 1920 an 1924 in which over 35 000 Jews from Russia, Poland and Romania entered Palestine. These were generally well educated people with secular Zionist beliefs and socialist views , they were more intent on establishing a Jewish homeland .Land was bought from Arab landowners, many of whom were absent landlords, and farms were created with an emphasis on establishing settlements that would operate exclusively on Jewish labor. This aggravated the Arabs since Arabs who had worked the land as tenants were evicted since only Jews were employed to work. Hostilities increased and resulted in several riots that broke out in 1921 and later in 1929 as Jewish landownership and immigration increased reaching 160 000 Jews in 1929 compared to 60 000 in 1919. Tensions kept building up until finally they came to a head way in April 1936 when the Arabs rebelled. The British government seemed unable to control the situation and decided to restrict Jewish immigration which naturally enraged the Jewish Community in face of the growing anti Semitism in Europe. ...read more.

Furthermore the British were receiving worldwide criticism especially after the Exodus incident in 1947, in which the British authorities denied entrance to a ship carrying 4500 Jewish refugees from Europe to Palestine and was sent back to Europe. This garnered further sympathy for the Jewish community which meant that public view was in favor of a separate state for Jews rather than a joint one between Arabs and Jews. The British felt they could no longer appease either Jew, Arabs or worldwide opinion, devastated by the war, with food shortages and rationing at home it was hardly feasible to maintain troops in Palestine. In May 1948 Britain decided it would hand over its mandate of Palestine to the Unites Nations, hence it was unable to establish an independent Palestine ruled jointly by Arabs and Jews. Thus the evidence presented demonstrates that initially the British government was unwilling to establish an independent Palestine since it would jeopardize its interest in the region and had compromised its position to both Jews and Arabs with the Hussein-McMahon Letters and later with the Sykes-Picot Agreement and finally the Balfour Declaration. Furthermore the conflicting interests of Arabs and Jews, their uncompromising position and the hostility existent between the two stressed that reconciliation was practically impossible. This coupled with the British government's inability to neither cope or handle the situation proves and demonstrates the difficulty and the intractable nature of uniting in one government and state two profoundly different ,deeply passionate and antagonistic peoples. ...read more.