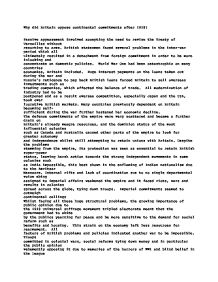 Why did Britain oppose continental commitments after 1918?

Why did Britain oppose continental commitments after 1918? Passive appeasement involved accepting the need to revise the Treaty of Versailles without resorting to arms. British statesmen faced several problems in the inter-war period which all ultimately resulted in a detachment from foreign commitment in order to be more inlooking and concentrate on domestic policies. World War One had been catastrophic on many countries economies, Britain included. Huge interest payments on the loans taken out during the war and Russia's reticence to pay back British loans forced Britain to sell overseas investments such as trading companies, which affected the balance of trade. All modernization of industry had to be postponed and as a result oversea competition, especially Japan and the USA, took over lucrative British markets. Many countries previously dependent on Britain becoming self- sufficient during the war further hastened her economic decline. The defence commitments of the empire were very scattered and became a further drain on Britain's already meagre resources, and the dominion status of the most ...read more.

This strain on the economy left less resources for rearmament. All factors of British problems and policies indicated another war to be impossible. Troops committed in colonial wars, social reforms tying down money and in particular the public opinion vehemently opposing it due to memories of the horrors of WW1 and blind belief in the League resulted in the 1919 Ten Year Rule which stated the British Empire would not be 'engaged' in any war for the next ten years and justified immediate cuts in the armed forces, expenditure and the abolition of conscription. The hostility and sway in the voting system caused parties to rethink their policies, concentrating on disarmament rather than rearming Britain in an attempt to regain popularity, as late as 1937 when the Inskip Report placed the army on the bottom of a long list of priorities, the government were adopting responsible, moderate, inlooking and appeasing policies to pick up the old Liberal votes. ...read more.

The legacy of the overly harsh Treaty made German grievances appear legitimate and appeasement a necessary antidote made from a position of strength. However, French German relations were very strained and Britain's attempt to placate French provocation of war such as the occupation of the Ruhr, left Anglo-French relations in a state of suspicion and resentment. Britain became a referee in strained Franco-German relations to retain peace but remained firmly neutral in all discrepancies, for example, MacDonald refused to sign a mutual assistance pact in 1924 to avoid encouraging French unaccommodating attitudes towards Germany. The Locarno Treaty security pact was an attempt to end European conflict in 1925. And seemed to 'heal' Franco-German rifts. This allowed Britain to risk a more detached position from eastern European problems, freeing them from any alliance system to concentrate on imperial and domestic policies. Intense speculation on the threat of Hitler was not considered. The Nazi movement was seen as a temporary, harmless and natural backlash to Germany's economic problems. ...read more.