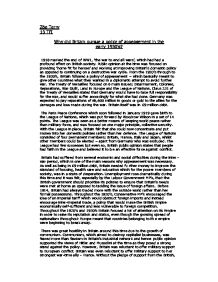 Why did Britain pursue a policy of appeasement in the early 1930's?

Z�e Terry 13 TFI Why did Britain pursue a policy of appeasement in the early 1930's? 1918 marked the end of WW1, 'the war to end all wars', which had had a profound effect on British society. Public opinion at the time was focused on providing 'home fit for heroes' and working at improving Britain's domestic policy as opposed to continuing on a destructive war cycle. From the 1920's through to the 1930's, Britain followed a policy of appeasement - which basically meant to give other countries what they wanted in a diplomatic attempt to avoid further war. The Treaty of Versailles focused on 6 main issues; Disarmament, Colonies, Reparations, War Guilt, Land in Europe and the League of Nations. Claus 231 of the Treaty of Versailles stated that Germany would have to take full responsibility for the war, and would suffer accordingly for what she had done. Germany was expected to pay reparations of �6,600 million in goods or gold to the allies for the damages and loss made during the war. ...read more.

Throughout the 1920's and 1930's Britain focused a lot of attention on its Empire in order to raise its reputation and status, even though the growing spread of nationalism throughout Europe meant that countries belonging to the empire were beginning to break away. There was great hostility in Britain around this time due to the growth of communism. Communism, which aimed to destroy capitalist businesses, was feared more than fascism in Britain's industrial network and hence public opinion supported the views of Hitler and Mussolini at the time as they posed a strong stand against the policy. However, Britain was reluctant to offer military support to European conflict. Britain was even reluctant to offer military support to her strongest war-time ally - France. Without the pledge of support from the British, France engaged on a strong policy of defence, and took matters into her own hands on several occasions, which didn't always leave Britain in the best position as she would have to step in, in order to avoid possible conflict. ...read more.

Appeasement was not the only policy that Britain could have followed. Appeasement grew due to domestic and economic difficulties faced by Britain at the time as well as the reluctance to face another devastating world war. The logic behind appeasement was quite simple. Britain could not afford to go to war; she were already in large amounts of debt, the military was not strong enough, domestic issues were rising at home and the Empire had been weakened and so to accommodate the Nazi's in Germany as opposed to risking a second world war seemed quite reasonable. Britain in the 1930's realised the strength of Germany and did have to consider then finally begin rearming but even so, Britain maintained a policy of appeasement in an attempt to solve German grievances concerning mainly the Treaty of Versailles by peaceful negotiation. Appeasement seemed the only logical and peaceful way of preventing what now appears to have been an inevitable war. Without Britain following a policy of appeasement I think it is fair enough to say that war would have surely broken out before 1939 and would have produced even further devastating effects on Europe. ...read more.