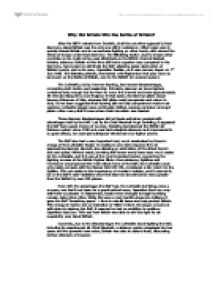 Why Did Britain Win the Battle of Britain? After the BEF's retreat from Dunkirk, of all the countries opposed to Nazi Germany, Great Britain was the only one still in resistance. Hitler's plan was to quickly invade Britain and to concentrate fighting on other fronts, with almost the whole of Europe under Nazi Germany. The Blitzkrieg tactics used to invade other countries so far could not be used effectively as the British channel blocked infantry advance. Britain at this time still had a superior navy compared to the Germans, hence plans to eliminate the RAF, allowing easier destruction of Britain's ports; and so its navy. Operation Sealion, as it was named, began on 1st July 1940. ...read more.

These German disadvantages did not bode well when coupled with advantages held by the RAF. Led by Air Chief Marshall Hugh Dowding, it appeared the RAF had a good chance of success. Dowding had planned the British Air Defence system since 1936 and used technological advances and improvements to great effects, for example bulletproof windscreens for fighter planes. The RAF also had a very important tool, much overlooked by those in charge of the Luftwaffe- Radar. It enabled a very fast response time to approaching German Aircraft, also allowing an estimation of the attack force's size and speed. Without radar, bombing RAF bases would have been much easier for the Luftwaffe, and it is one of the most important factors concerning the fighting success of the British Fighter Pilots. ...read more.

Even with the advantages the RAF had, the Luftwaffe bombings were a success, and had it not been for a great tactical error, Operation Sea Lion may well have succeeded. In September, tactics were changed to begin bombing London, later other cities. While this was a most horrific phase for civilians, it gave the RAF "breathing space" - time to rebuild bases and help protect Britain. This change in tactics was an indication of Hitler's intent. No longer concerned with plans to destroy the RAF, it seemed he had no ambition to continue Operation Sea Lion. This was how Britain was able to win the fight for air superiority over Great Britain. Concisely, due to the disadvantages the Luftwaffe faced fighting the RAF, including its experienced Air Chief Marshall, a defence system developed for four years and the powerful new radar, Britain was able to defend itself, dissuading further attempts of invasion. ...read more.